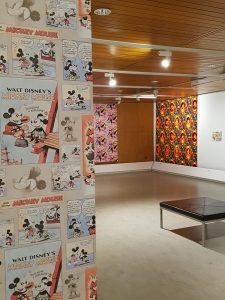 On first glance the Bodies of Colour exhibition at The Whitworth, Manchester may simply seem to be a collection of kitsch wallpaper.  The offshoots of designs featuring the likes of Mickey Mouse, The Flintstones, Sindy and the Spice Girls certainly create a nostalgia fix and memories of those childhood fads that adorned your own bedroom wall may come flooding back.

Except that this isn’t a simple exhibition…  When you consider that wallpaper was developed during the age of colonialism, and its popularity grew at the same time as the rapid expansion of the British Empire then you start to look at the designs in a different way.

Some of the patterns look pretty, and earlier examples remind us of the penchant for chinoiserie in centuries past, but these were designs from a Western perspective created by the hands of a Western artist.  Aesthetic beauty or the taking or transmogrifying of a culture?  There are images of African hunters, golliwogs, and even though the ‘Uncle Tom’s Cabin’ themed paper was designed for locals who wanted to support the anti-slavery movement, it is another concept unsettling to contemporary eyes.

Aesthetic beauty or the taking or transmogrification of a culture? 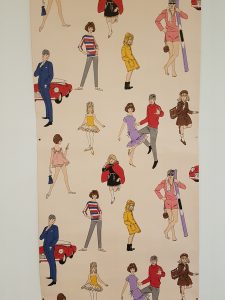 It’s not just slavery and racial stereotyping that is covered here.  The retro images of children’s favourites such as Sindy and Action Man emphasise the messages about gender and roles and our changing attitude.

Does the removal of the ‘Indians’ in Cath Kidston’s nostalgically themed Cowboy design show progress?  That is the debate that is inspired by Bodies of Colour.  We can often be cautious around the subject of free speech and censorship.  We feel we are more tolerant and accepting but we are often unaware of being influenced by subliminal messages whether on the billboard, in a magazine, or through social media profiling.

The repetition of a design on a feature wall echoes the repetition of ideas about people and stereotypes.  Whether this will ever change, Bodies of Colour successfully shows that wallpaper is more than just a backdrop.

Bodies of Colour is on display now until May 2019

Written By
Paul Davies
More from Paul Davies
It’s ok to be late to the party.  Discovery in music seems...
Read More