Electroshock Death Grip, the third album from Brooklyn-based electro-funk band Black Taxi is absolute pop-jam awesomeness. The band combined elements of funk, EDM, pop, and rock, and created ten tracks full of “grit pop” and “dance punk” sound, laced with a cool retro vibe. The band aptly describes the album as “introspective and retrospective in its lyrical content, and futuristic in its production,” with Moog synths and trumpet lines paying respect to 1970s-era funk and disco, while punchy drum production and EDM sounds give the album an ultra-modern feel.

According to guitarist Bill Mayo, most of the songs are danceable pop jams that have heavily funked-out guitar lines, á la Nile Rodgers and Daft Punk.  Yet while the tracks are fun and rhythmic, they are also full of the dark, sarcastic lyrics for which Black Taxi are known. In fact nods to earlier eras notwithstanding, the album makes clear from the first notes of opening track “21st Century” that the boys of Black Taxi and their music are completely fresh and current. With awesome synth sounds, bass lines, guitar riffs and lyrics, the band successfully creates a strong, modern take on some very retro grooves.

The more I listened to this album, the more I found to love on it. Lead single, “Final Days” is a fast, fun synth-heavy track for which the band just released a lyric video. The simple, repeated phrases that comprise the lyrics are set to an awesome melody. This is a song you can’t help but sing and dance along to. Really, you just have to move as you sing along to: “Love me down. Love me all the way down to the floor. ‘Til you just can’t love me again. Take a minute baby count to 12 and then Love … Me … Down.” Another of my favorite tracks is “Only Room For One Ninja In This Town.” It opens with peppy synth layered under darkish lyrics: “I lost my innocence, now I have no fear … Oh, you are not alone, a victim of the throne. Oh, you are not alone.” Near the end of the song there is a great instrumental section featuring electric guitar, complete with distortion. This pretty much cinched my love for it. 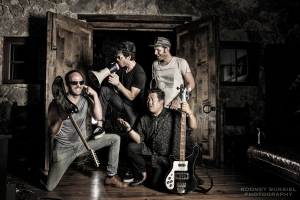 Another true stand out track is “Ropes,” with its retro-70s sounding synth, simple strumming guitar, and light, airy vocals set to some pretty dark lyrics. I don’t usually include a lot of lyrics in a review, but these are pure poetry. And the use of a deceivingly simple melody to deliver them is just so … incredible that I have to include some, okay? I just do:

I also adore “Pulseless.” The track begins with a softly spoken lyric and moves into a poppy drum beat with synth sounds during the verse. But then the track just slides into this great bass line in the chorus that I love. The track’s crisp, sharp drumming and dirty bass are awesome. Go listen to it. I know you’ll agree. I also need to mention the closing track “Into The Night” because it opens with a trumpet solo, and then the trumpet is heard throughout the rest of the song. Very nicely done.

Black Taxi created an outstanding and cohesive collection of fun, danceable, and musically interesting songs. Electroshock Death Grip is ten tracks of good music that will have you at a minimum, tapping your toes and grooving in your chair as you sing along. But be warned, air guitar playing and stanky face making may also occur. An album that needs to be heard.