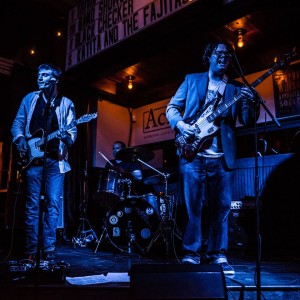 Washington D.C-based indie punk band Black Checker has released a new EP aptly entitled Fast.  The band, consisting of Jim Cordes (vocals and bass), Tony Porreco (guitar and vocals), and Names Thompson (drums and vocals), is a three-piece set, though their sound betrays their small number.  Flowing in the same vein of bands such as The Replacements and Cloud Nothings, these guys bring about a brisk, uptempo rhythm, staying true to the aggressiveness of punk, away from the tampering and watering-down commercialism of the mainstream.

The album consists of only six tracks, but the material is anything but third-rate.  The fast-paced guitar riffs including the rapid, hard hitting percussion behind every song makes it a headbanging, Converse-enveloped toe-tapping good time.  At the same time, the lyrics are simple and straightforward and easily relatable to anyone who’s going through relationship issues or who needs a little pushing forward on the gameboard called Life.  “Blick Badger” is a prime example of the latter.  Who hasn’t sworn up and down that they were getting away and proclaimed themselves finished after an upsetting event?  This song conveys this type of anger and waywardness of emotion (where else do you get a zany name like Blick Badger from?).  “Man Enough” takes it a step forward, picking up the pace and aggression of trying to figure out the fickleness of human affection.  For a girl from the suburbs like me who’s always been a little restless and has felt the sting of a seemingly endless losing streak, that song was a personal favorite. While the album does its exploration of teen (or young adult) angst, it isn’t without its sweet moments.  The beginning track “Bagel Girl” is a nice punk dance song about falling in love with a girl who works at the local bagel shop. It’s a down-to-earth love story, charming and simultaneously cheeky in its ending.

Fast is Black Checker’s first EP, but it doesn’t come tiptoeing onto the music scene; it makes a grand entrance.  It’s fast in its track listing and the music is fast in its tempo, but it doesn’t breeze past you with transparency and repetition.  Rather, it is a true punk album, tongue-in-cheek, loud and real to a fault.  Indie punk fans can check it out on SoundCloud as well as the band’s website where the album is up for immediate download. Punk returns to its indie roots and Black Checker is its gardener with an excellent green thumb.