Whoever thought that great pop music would come out of South Dakota?  Well it has.  Paradise Fears has been at this since high school.  Friends Sam Miller (vocals), Cole Andre (guitar, vocals), Michael Walker (keys, vocals), Jordan Merrigan (guitar), and Marcus Sand (bass) released their first album The Secret To Dropping Out in 2009 then dug in for the long haul.  Today they are touring the U.S. on their first headlining tour, Live Forever, with another pop powerhouse, William Beckett.

The tour rolled into Connecticut this past weekend and seriously rocked the house down.  The Space was packed,which was not a complete surprise with Beckett on the bill.  He’s filled the venue previously with old The Academy Is… fans, along with lovers of his new music.  But the surprise came when the crowd not only did not dwindle for Paradise Fears but increased.  From the opening phrase of their first song, it became apparent that many in the room were not novices to this band.  At least a third of the crowd sang along…loudly.  In fact as the set reached its pinnacle with “Sanctuary” fans took over the entire first verse and chorus while band provided the instrumental support.  It was also interesting to observe that the audience was fairly balanced between guys and gals it wasn’t just significant others being dragged to the show.  The males were just as devoted to the music as the females. 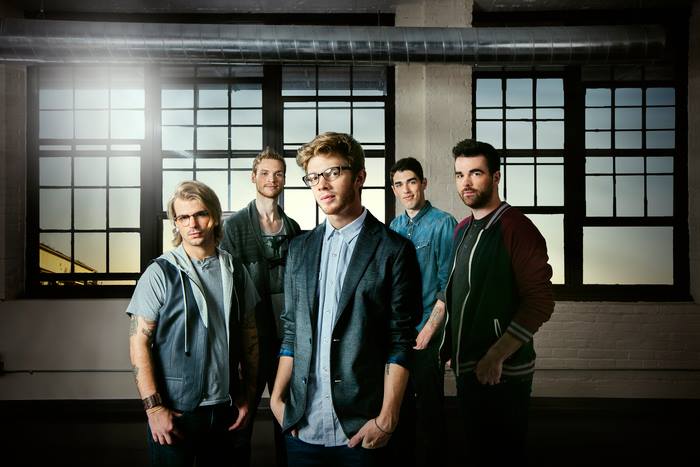 Throughout their performance, Miller noted being drawn to give everything he had despite the fact that he needed his voice for a radio appearance in Boston the following day along with the rest of the tour.  The energy exchange between band and crowd never lost connection and remained high even for slower numbers.  Paradise Fears shared tracks from their entire catalog along with a few great covers during the ninety-minute set.  A personal favorite was “Who I Am Hates Who I’ve Been” by Relient K.  But the absolute best was their rendition of Macklemore’s equality anthem “Same Love”.  Paradise Fears took the opportunity to return a favor by having Beckett join them to perform the song.  Earlier William had Sam sing-in with him.  This seems to be a trait of Beckett’s, including tour mates and creating a very close knit family no matter who is on the bill.

When Merrigan pulled out a trumpet for one number, that was the icing on the cake.  This is superlative pop rock music.  This is what more people should be listening to.  It makes it even more obvious how much corporate music is manipulating the industry and purposely not promoting truly great art to the masses.  Thankfully Paradise Fears is incredibly determined and resourceful enough to have found people outside of Vermillion who appreciate what they are doing and have now helped get the band not only out from under the radar but all over North America. They were just signed by DigSin of Nashville so hopefully this will mean more new recordings and more tours.

As noted, William Beckett opened for Paradise Fears.  He is no stranger to the pages of FourCulture and proved yet again why he garnered a full feature in the current issue of the magazine.  Although his set was a rather abbreviated 45 minutes, he shared favorites from his current album and then teamed with Miller for a sing-along fest of Snow Patrol’s “Chasing Cars”.  The set closed with a big crowd pleaser, “Benny and Joon”.  In between songs, Beckett delivered his signature sometimes serious, more often witty stage banter.  The man is what every solo artist should strive for when performing live.  The Chicagoan was born for the stage.  He is also a commensurate musician and one has to wonder how many songs are left inside him.  Hopefully enough for many more albums as it is always a joy to listen to his creations.

After the show, Miller and Beckett exited to the parking lot to fulfill their ice bucket challenges for the ALS fundraiser.  Using what appeared to be one of the tour’s ice chests, the guys stripped to shorts and t-shirts and took the plunge.  It was great ending to a truly great night.