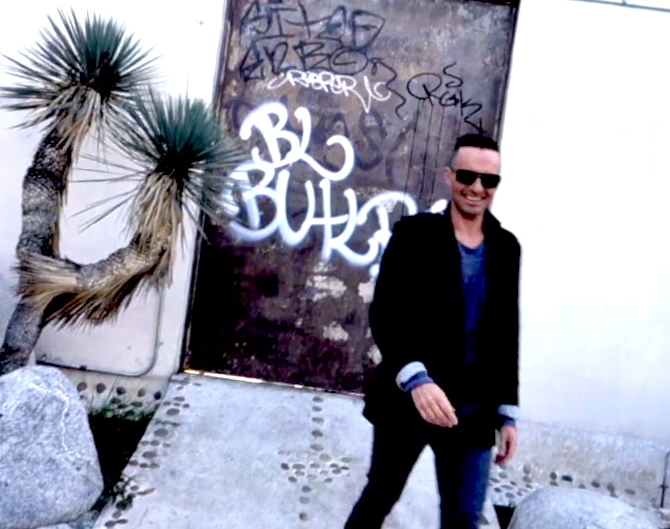 [debut] is more than just a band — it’s a music and art collective with an ever-changing cast, directed by musician, composer, and producer Gareth Thomas. [debut] began as a solo project and the first two studio albums, Soaked (2006) and Set To Zero (2010), are instrumentals and have tracks featured in films and television advertisements. Based in Los Angeles, California, [debut]’s sound lies somewhere between electro-pop and alternative rock.

Postcards From Berlin, the new EP from [debut], is in the midst of a 30-day Kickstarter campaign to help fund creation of the EP. Gareth has harbored the idea of recording an album in Berlin for years. Some of the greats of our time have recorded their finest work there including David Bowie, U2, Depeche Mode, and Nick Cave. Postcards From Berlin, is a collection of songs inspired by Berlin, and according to Gareth, they are “songs filled with the coldness of Eastern European winters, soaring pianos of classical eras gone by, and a raw industrial edge that only that city can inspire.”

Right now, the project is in full production mode, but the final recordings in Berlin will not happen until early September. To complete the recording process, Gareth will be traveling to the streets of Berlin and the famous Hansa and UFO studios, followed by mixing and mastering of the music. Pledges made on the Kickstarter campaign help pay for studio time and recording engineers, videos and photography, plus the production of CDs and artwork.

Backers of the campaign are offered several incentives and rewards ranging from a personalized postcards sent from Berlin to custom Converse sneakers to a lead role in the music video for the first single from Postcards From Berlin. Two tiers include recording your voice in person with Gareth — one at UFO Studios in the famous Nazi war bunker room and one at Hansa Studios in the famous “Meistersaal” historic concert hall, both including commemorative photos.

To have YOUR VOICE featured on the recording as part of the “Berlin Choir” and YOUR NAME in the album credits, you must first buy ANY level of reward. You will then be eligible to email a recording of yourself singing any note of at least eight (8) seconds in length. Gareth will take all of the recorded notes to Berlin and create a virtual choir that contains all the voices from all the pledgers, then play back that choir in the huge halls at those studios and record it with all the reverb and presence of those rooms.

The Postcards From Berlin Kickstarter campaign is ten days deep and is already backed by approximately 45%! The campaign goal is $7,500 and will only be funded if the goal is met in full by Friday, May 30th at 9:09 PM EDT. Get involved and become a part of the new [debut] EP, Postcards From Berlin, and have your voice on the recording. Please share what [debut] is trying to create with your friends and family to help make the “Berlin Choir” one damn massive choir!