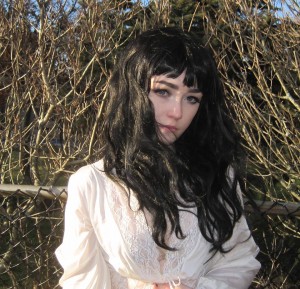 To say Nicole Dollanganger has had a meteoric rise from experimental social media music posts to cementing her status as one of the most unique and beautiful new artists on the rise would be the understatement of the year. She ascended at a lightning fast pace from being a Tumblr darling to being the first artist to release an album on Grimes‘ artist collective the Eerie Organization, which is an unprecedented milestone in itself without throwing in the fact that there is no one out there who sounds exactly like her.

Dollanganger’s early releases mixed morbid imagery, emotionally volatile lyrics, and vocals like the sweetest cotton candy tinged with poisonous decay. It’s been fascinating to watch her experiment and come into her own as an artist, and her most recent work might possibly be her best to date.

If the track “Beautiful and Bad” is any indication, Nicole’s next release is going to blow us all away. Gone is the novelty contrast of dark aesthetics and angelic innocence gone awry. Instead, the new song starts out in a decidedly dark, almost gothic place and incorporates the metal elements that Dollanganger has been experimenting with in some of her more recent covers. Nicole’s signature dreamy vocals form a seamless marriage with the bed of noise, guiding the listener into a new landscape that is both hallucinatory and dangerous. She explores themes of temptation and what it is to revel in one’s own annihilation, whispering delicious violence in your ear. “I’ll destroy everything you have”, she says, and it’s difficult not to want her to.