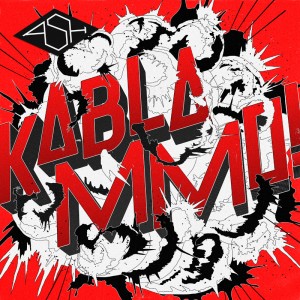 UK trio Ash return with their sixth album, Kablammo! featuring twelve tracks of typical melodic indie rock.  It’s been eight years since their last album, Twilight of the Innocents and while their year of releasing a single every two weeks (the A-Z series of 2009) allowed some experimentation, this album is a back to basics approach.

The first three songs hit you straight away sounding like they should be on a ‘best of’ Ash, all instantly catchy and you soon get to know them with their singalong hooks.  Retro, raw and powerful, they set the tone well.

In our interview with Tim Wheeler in latest Fourculture magazine, he talks about looking back and returning to that classic three-piece Ash sound and there are themes of nostalgia in “Machinery” and “Bring Back the Summer”.  They still have that nerdish appeal, sneaking in some riffs from previous songs, as well as a knowing nod to previous influences in the Wild West sounding interlude “Evil Knieval”.

This time round, Ash used Pledge Music to help create the album also involving fans in the process.  From backing vocals to observing the string arrangements in the studio (a nice touch on gentler songs like “Free” and “Moondust”) there were a range of perks making this a more interactive album than before.

Taking in enough variety within the space of the 12 songs, this album is a great return.  Put some Kablammo! into your life…

Written By
Paul Davies
More from Paul Davies
“Smoke in the Air” is a smouldering soundtrack for the winter…a chilling,...
Read More