Aniaetleprogrammeur (or AELP to avoid the mouthful) is an electro three-piece based in Berlin, Germany. The band originally formed in Paris, France in 2005 and independently released their debut album — Die Kir(s)che auf dem Kopf [which translates roughly to “The Church (Cherry) on the Head”] – in 2009. Aniaetleprogrammeur has been described as unclassifiable, though others have defined them as dirty electro rock, electro punk, cyber punk, electro clash, psychedelic electro, and industrial electro. Steve Morell, legendary musician, producer, and founder of Pale Music International,  referred to the band as “the kings of modern no-wave.” According to the trio, “no-wave is a kind of deconstructed new-wave; you could say post new-wave.”

Released in 2012, the band’s sophomore album, The Friendly Expectations of the Stars, combines ambient instrumentals with punk elements and an infusion of filtered vocals. The album is described as a prolongation of their 2009 debut, which was re-released in 2011 on Force Royale Records under Pale Music International.

The Friendly Expectations of the Stars is a cinematic voyage inspired by darkness, and accompanied by self-directed videos that illustrate the band’s imaginary world. The album creates experimental soundscapes with noise and distortion, mixed with piano, guitars, layered beats, and electronic synthesizers, plus the often disjointed vocals of Hanri, which can be described as an instrument on their own. 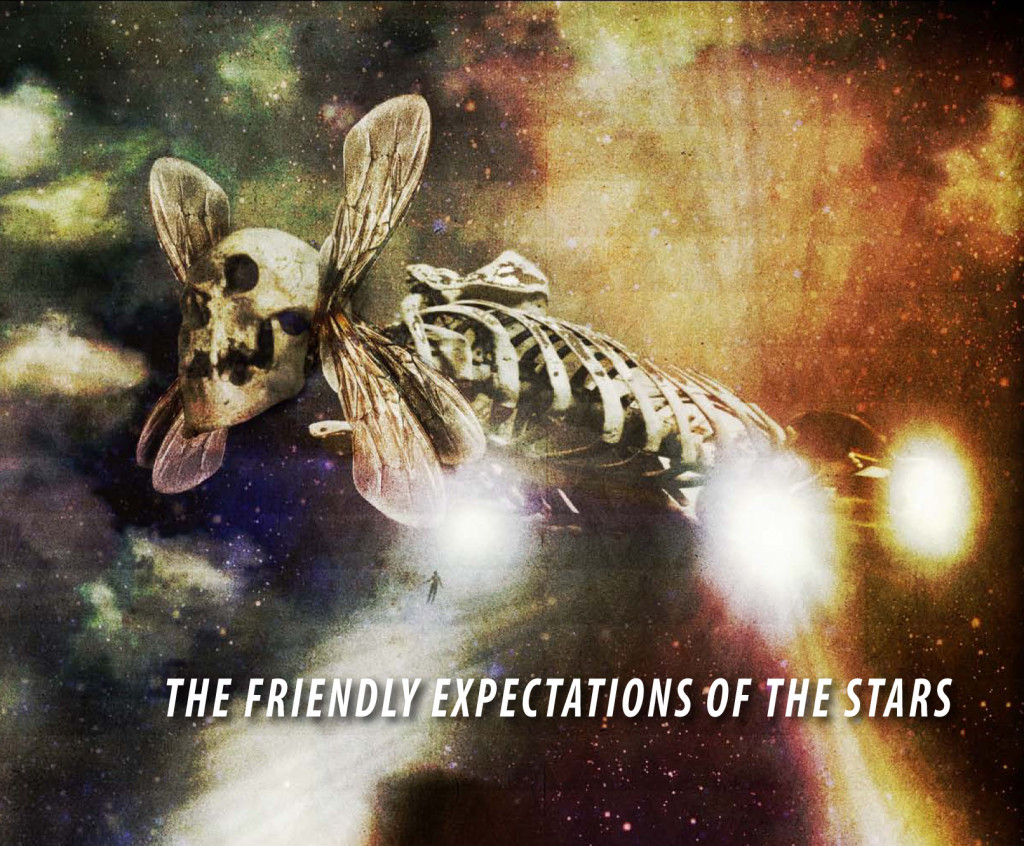 The album opens with an introduction of pops, clicks, clanking, white noise, and what sounds like record static, accompanied by indeterminate and eerie-sounding whispers. The second track, “Realism”, speeds up the pace a bit, claiming to have your soul, all while keeping with the haunting theme of the opener. Among the cyber punk electronics and disco influence, the song promises: “I swear that things will be the same with fear and without end.”

The third song, “Moldy”, incorporates elements of trip-hop over distorted vocals and a slow, creepy, circus-like beat. “Time Travel”, at six-and-a-half minutes in length, is all over the place, featuring often fast-paced beats and vocals that claim “they hate you.” The electronic harmonies of “Out of You” remind us that nothing will stop the fear.

“Low Passion” is easily one of the most understandable (and danceable) songs on the album. The accompanying music video, released in June, was directed by the band’s very own Valquire, and features the remaining two members – Hanri and Tata – as well as a slew of others, all donning wedding dresses. The video opens in a bathroom with two bearded men in wedding dresses lathering one another up in a bathtub, which ultimately leads to a make-out session and bathtub spooning. Cue more wedding dresses, smoking cigarettes through veils, and what appears to be a karaoke dance party. The video closes with a unisex game of soccer (or football, depending where you live) in – wait for it – white wedding dresses.

“Interlude” cuts the album in half with a beautiful instrumental that sounds as though it could be featured on the score of a horror film about vampires. The haunting “Affliction” spins a tale of lies, cheating, and begs to be left alone. “Out of Me” is an instrumental electronic composition that features freeform piano and could also easily be featured as a score piece on a film.

“Project 21” is the longest track on the album, clocking in at seven minutes and twenty seconds. It seems to be an experiment in classical music with a hint of electro. It is the only song on the album that is sung (and whispered) entirely in French and serves as great background music. “The Great Change” has a psychedelic influence, with an almost theatrical science fiction theme and is reminiscent of the band’s debut album. The album closes with more white noise, electronic humming, and creaking.

The Friendly Expectations of the Stars has received critics from the international press, as well as songs being featured on compilations and radio shows. Aniaetleprogrammeur has toured venues and festivals throughout Europe and Japan. Their stage presence is described as “disturbing and danceable in equal measure,” with an atmosphere created by smoke and strobe lighting that is all programmed by the band themselves.

Aniaetleprogrammeur’s second album can be abrasive and spooky at times with sound and vocals alike, but offers a unique style of electro that is melded with elements of several genres. Conceptually, their newest musical installment is loosely based on the star’s prediction of the impending apocalypse. As far as the apocalypse goes, there have been no biblical signs. The seven seals seem intact and The Four Horseman have yet to wreak havoc on the Earth, bringing about the Last Judgment. However, if this album is any indicator of what is in store for humanity, the apocalypse will be utter chaos, because this album is chaotic.