X Ambassadors and Interscope Records are working hard to make this band as popular as they deserve to be.  In the days of music scouts, this is a group that definitely would have gotten radars pinging.  Their music is different from what is spinning on the radio in all the best ways possible.  In a recent interview with founder and frontman Sam Harris, their influences actually involve a lot of hip hop in that the genre pulls from so many others. Sam is a fan of KRS1, Tribe Called Quest, WuTang Clan, Gangstar and Biggie. When X Ambassadors sits down to create beats they will combine funk with everything from classical to folk and even medieval chants.  Harris says though, that the most important thing he learned from hip-hop was the power of words.  “I got into songwriting when I discovered I couldn’t rap…at all!”  From there he went poking around in his father’s extensive record collection along with listening to his own favorites such as Red Hot Chili Peppers and Coldplay.  From there he looked up the artists who had influenced those people and was listening to The Stooges, The Damned, Funkedelic, Sly and The Family Stone and later Velvet Underground.  Sam says the band likes crossing all genres to take something familiar and make it new and fresh. 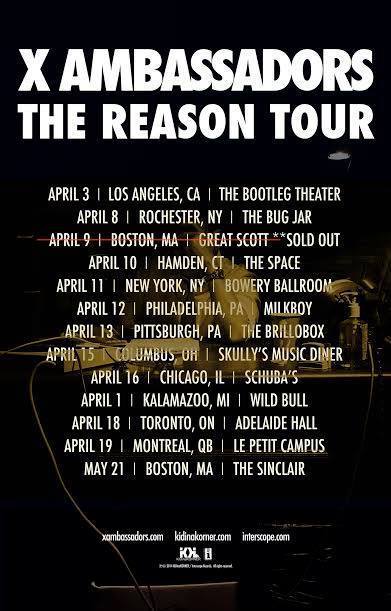 New York natives; Sam, his brother Casey and Noah Feldshuh grew up in upstate in the college town of Ithaca.  Harris says he still feels his anchors there now that all three have put down roots in the Bushwick section of Brooklyn.  Sam and Noah made the move to the city for college which is where they found their drummer, Adam Levin.  They had gotten far enough into the band creation process that they knew they needed percussion.  When they discovered Adam played drums they slid a note and a demo disc under the door of his dorm room.  Levin is from Los Angeles.  Casey parted ways with Sam and Noah after high school to attend a school in Vancouver, WA to learn the trade of piano tuning.  He rejoined the group in New York and worked for a piano store in midtown Manhattan for three years.

The band has been touring almost constantly for the last year.  Their most recent outing was as the opening act for Panic! at The Disco.  They have shared bills with Jimmy Eat World, Imagine Dragons and The Mowglis.  Starting next week they are getting their first headlining tour.  Sam explained that with a father who was a publicist in the film industry, he got early experience in traveling a lot so now touring comes pretty easy.  When asked about the upcoming tour being in smaller venues as opposed the larger rooms they have played, Harris told me that the band has a rule; “If you’re in an arena you have to make it sound as intimate and awesome as a tiny club and if you’re in a tiny club you’ve got to make it feel like you are at the biggest, most badass concert you’ve ever been to.”  X Ambassadors understands that live performances are the job they signed on for and so that means doing it to the best of your ability.  “People have paid money to come to see you so you owe them a great show.”  The other thing Harris says bands have to keep in mind is that there may be label and/or management people along with press in the audience.  But it is the regular audience that should be the focus.  People want to like you, even critics.  So X Ambassadors does their best to win people over.

As far as recording schedules go, X Ambassadors is going the EP route right now.  They just released The Reason.  Sam says they have at least two albums worth of material currently that they can work with when not on the road.  For now though they are focusing on the upcoming tour and sharing what they have released so far.  Besides this tour, they are also on the bill for the Firefly Festival in Dover, DE in June and the Bunbury Festival in Cincinnati in July.  Bookmark their website for all their tour info.