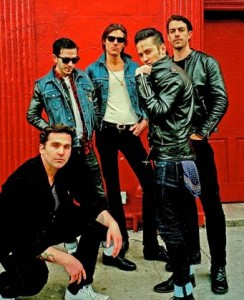 If you are tired of the seriousness of modern guitar bands then here’s a New York five-piece with something a little different.  Jeremy & the Harlequins offer a sound with its roots in the 50s and 60s and their debut album American Dreamer ticks all the right boxes for those wanting a quick rockabilly fix.

Clad in leather and denim, with quiffs and turn-ups in all the right places, it’s a studied image but while the ten songs here often echo familiar melodies from the likes of Buddy Holly, Del Shannon and The Everly Brothers, there’s enough edge and attitude to bring the sound into the 21st century.

The album was written in just a week and the 50s rock n roll influence is shown through hints of the Gretsch guitar sound and the use of slapback delay on the vocal.  They avoid being too authentic in the overall production though so songs like “Some days” and “You’re my halo” would fit right in with a contemporary playlist.  There’s also a glam rock stomp in places and opener “Trip into the light” initially sounds like Marc Bolan singing “Be-Bop-a-Lula” but it has a gruff, gritty underbelly, like a 50s noir soundtrack for the ‘epic HBO theme tune’ age.

The sound claimed by teenagers back in the 1950s can still hold up and excite today and so we have songs like “Cam girl” with lyrics about meeting girls on a MacBook rather than in a Milk Bar.  The original songwriters of the age needed to use terms like ‘shake, rattle and roll’ to subtly mention (whisper it!) s-e-x.  Jeremy & the Harlequins have no such constraints, using the f-word when those who influenced them clearly couldn’t.

The greased-up gang mentality swagger subsides with their slower numbers.  Reassuring words to comfort someone going through the emotions of a breakup (“Right out of love”) become almost celebratory in a union of joint suffering.  There’s a freshness to it, a nostalgic air of discovery.  It is music to look into someone’s eyes to, whether at the end of a drive-in movie or a Netflix bingewatch.

We’ve had rock and roll revivals before when cool cats (both Pole and Stray ones) had a brief run of hits in the early 1980s and in some circles the style has never gone away.  It is worth remembering that rock and roll is a spirit and an attitude as well as simply a genre and that is something these serious, modern guitar bands would do well to remember.

American Dreamer is out now on iTunes – Link

A vinyl release of the album will be available in May.

Written By
Paul Davies
More from Paul Davies
This is Keiandra’s debut single.  You will love it. Imagine the...
Read More