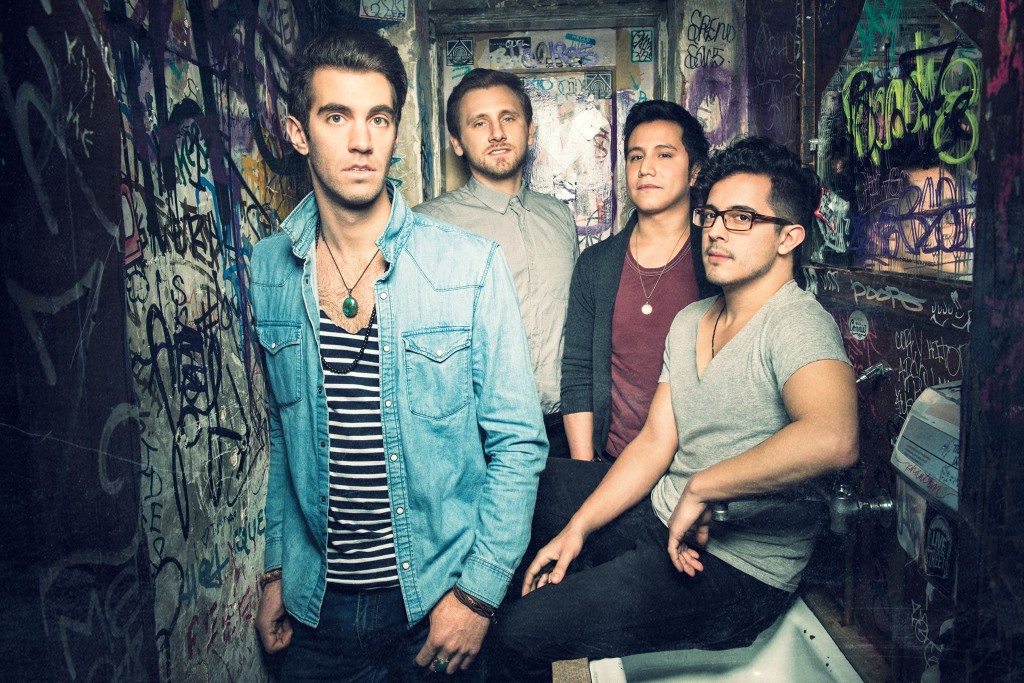 American Authors, the alt-pop/folk-rock band best known for their feel-good, banjo filled hit “Best Day of My Life,” has released Oh, What A Life, their full-length album to follow up last year’s self-titled EP.  The album is optimistic, infectious, fun-filled, and definitely worth a listen. Before I was asked to do this review, American Authors was not really a band on my personal radar. I was very pleasantly surprised by just how much I enjoyed listening, and singing along, to the music of this delightfully fun and upbeat band.

American Authors is Zac Barnett (lead vocalist), James Shelley (guitarist), Dave Rublin (bass), and Matt Sanchez (drummer). The four musicians met while students at Berklee College of Music in Boston, and started playing together as The Blue Pages. After a move to Brooklyn and a name change, the band now known as American Authors grew a large fan base with their break out hit, “Best Day of My Life.” Although “Best Day”may be the most well known single on this album, it is by no means the only track worth a listen.

The album opens strong with the track, “Believer.” This was the first single off last year’s EP and spent 22 weeks on Alt Nation’s Alt-18 Countdown. With a great acoustic guitar riff and a foot tapping sing along chorus, it is a great start for the album. It is followed by one of the album’s standout tracks, as well as one of my personal favorites, “Think About It.”  With its huge synth transitions, sing-along chorus and endearing message – that sometimes it best not to “over think” things – it is impossible not to sing along to this track.  And keeping that effervescent pop feeling going, the third track is the hit, “Best Day of My Life.

Other tracks that stand out include “Luck,” “Trouble,” “Hit It,” “Home” and “Oh, What A Life.”  “Luck” is an upbeat, yet emotive track. With a steady percussive beat and syncopated guitar, this autobiographical song has Barnett apologizing to his parents and trying to make them understand why he left home to pursue his dreams. It is followed by “Trouble,” a fun song that provides a nice change of pace – from the faster, upbeat tracks it comes between, as well as between its own slower paced verses, folksy, bouncy banjo and upbeat chorus. The album revs right back up with the hyper kinetic and lighthearted, “Hit It.” This fun track is familiar to many from its placement in the “FIFA 14” video game

My personal favorite on the album is the soaring emotive story-telling found in the rock-ballad, “Home.”With its military style marching-band percussion, searing guitar solo, four part harmonies and Irish-folk-style-like vocals near the end, I have had this track on repeat a number of times already.  The final, and title track, “Oh, What A Life” is another song in which Irish influences can be heard. It also has a soaring chorus and fabulous percussion to make an awesome close to this debut album.

Oh, What A Life is an upbeat, feel-good, sing-along indie-pop and folk rock influenced album; as such, it is a very good one. I never have understood those who criticize an album for not being something it never portended to be.  If you want deep, poetic, complex lyrics or cutting-edge instrumentality, then this is probably not the album for you. But if you want fun, uplifting, pop/folk music that will make you want to dance and sing along; on a well-executed album with polished production; that is chock full of songs that say don’t “over think about it,” but have fun and enjoy; then Oh, What A Life is an album you should hear. An emerging indie-pop and folk-rock band, American Authors has certainly earned a spot on my “summer road trip” and “day at the beach” play lists.

Get Oh, What A Life on iTunes