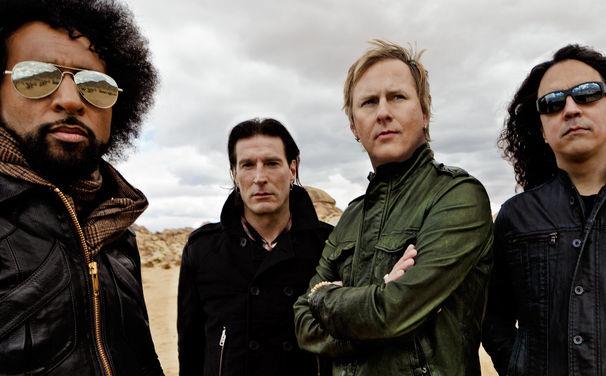 One the original Seattle Big 4, its safe to say that Alice In Chains have had their fair share of trials and tribulations over the years. But since the resurrection of the band in 2008 they haven’t looked back and London was just about to be hit with a tornado of timeless heavy rock.

First up is “Them Bones” which singer William DuVall and guitarist Jerry Cantrell combine to rock Ally Pally, with DuVall looking extremely cool in shades and black leather jacket. Second song, another from the Dirt album, is “Dam That River” with DuVall keeping up the high standards of former AIC frontman, the late Layne Staley. Third song quickly follows with “Check My Brain” from the Black Gives Way To Blue album, and as the chorus of “California, I’m fine…” has the city of London feeling pretty damn good too, prompted by DuVall shouting, “Hey London, let’s hear ya!” The crowd duly obliges. The animated frontman then asks, “Feel alright? Said you feel alright?” and bursts into “Again” from their eponymous fourth album. Jerry Cantrell then addresses his troops before declaring “…lets see if we can add history to this place” and the classic “Man In The Box” blasts through Alexandra Palace with DuVall’s vocals really giving every post 2008 song the justice they deserve. One of the best B-Sides of AIC’s collection gets an airing in the form of “Got Me Wrong” before the set gets bang up to date with “Last Of My Kind” and “Hollow” from this year’s The Devil Put Dinosaurs Here album. Cantrell then gives a nod to his bandmates — DuVall, tireless bassist Mike Inez (who hadn’t stopped travelling the length of the stage all night) and drummer Sean Kinney, doing his job effectively as always. “Rotten Apple,” from the Jar Of Flies E.P, follows that with Cantrell dedicating it to the late but not forgotten former band members Layne Staley and Mike Starr. From the same album “No Excuses” is the next song up before “Stone” is the final song from the latest offering to be played. “We Die Young” from the first album, Facelift, gets the capacity crowd singing as one before one of the more darker numbers is done in the form of “Dirt.” One more number before the encore is another classic from the Dirt album, “Down In A Hole” and DuVall shows no sign to letting his very impressive handling of the early years slip in standard.

Ten minutes of rest sees the band burst into “It Aint Like That” before the first iconic song of the encore comes in the form of “Would?” and the show closes with the second iconic number, “Rooster.” AIC are one of the world’s premier rock bands and if anyone still thinks that William DuVall isn’t right for the band then I personally challenge you to go and watch them live. The legacy of Layne Staley lives on through a different messenger. And the message still gets sent, very loud and very very clear.