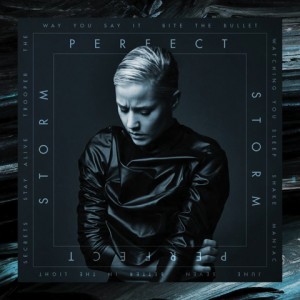 In the month of Eurovision, Swedish pop brings its own connotations and expectations and as far as the pop production line goes it has an enviable list of exports over the last 40 years.

Vanbot (real name Ester Ideskog) is the latest act to namecheck at all the right parties. She has had a busy couple of years after scrapping her previous album not long before the scheduled release. Taking a break due to a creative breakdown she has now returned having put together Perfect Storm, an album of smooth electro-pop at just the right side of bubblegum with plenty of club elements to delight pretty much any pop fan.

First single “Trooper” is a perfect example of this, all ‘na na na’ hooks with a retro synth solo, and you are reminded at how influenced the likes of Taylor Swift are by Scandinavian pop (her recent song “Out of the Woods” sounding like a Roxette number from 20 years ago)  The euphoric “The Way You Say It” follows it with 80s hints and elements of Tegan & Sara’s Hearthrob album.

It’s not all high-octane pop however. “Watching you sleep” is reminiscent of fellow Swedes The Knife, with its emphasis on toms and bleeps creating a different atmosphere. The lyrics even mention ‘silent shout’ and a warped male-sounding backing vocal (which returns in a more distorted form in “Maniac”) adds a darker edge before it evolves into epic trance.

Her vocals sound naive and harsh in equal measures which means you get all the emotions and in a genre which often relies on artifice this provides a nice dimension. Perfect Storm is a synth-heavy set of sparkling, sing-along tunes, from the seductive simplicity of “Shake” to the pick of the singles “Seven” which is hook after hook of bright infectious pop.

Perfect Storm is available from today.