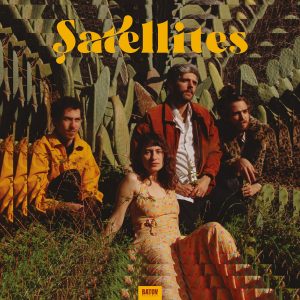 Şatellites describe their sound as ‘retro-fresh psych à la Turk, a musical “laboratory” lost somewhere between the mysterious alleys of 70’s Istanbul and the scorching sun and crystal blue sea of Jaffa-Tel Aviv’, and if that doesn’t draw you in then I’m not sure what will!

While their self-titled debut album contains primarily cover versions, it is a welcome addition to the wealth of new sounds inspired by the traditions of Turkish folk and Anatolian psych. They are another band recontextualising a culture in the same multinational or cross-continental vein as Khruangbin, Altin Gün and Derya Yıldırım & Grup Şimşek.

With the sound of a Diwan Saz (a long necked lute) at its centrepiece, the ten songs look to revive old Turkish classics (songs from Kamuran Akkor, Zafer Dilek)  as well as some deep cuts ( Ferda Gül, Hakki Bulut) with a satisfying mix of aggressive grooves and infectious melodies.

It’s a great entry point for anyone looking to get into the genre or its history, which has become a hot property for vinyl collectors. Purists will also find something to enjoy with the songs given a 21st century flavour through cosmic swirling synths while still maintaining the spirit of the genre.  It’s all here – the groove of funk, the rhythm of disco, and reverb of psychedelic, amidst traditional middle-eastern rhythm and structure.

Naturally there’s the temptation to seek out the original recordings but going down the rabbit hole is all part of the fun.  The more modern, heavier sound of Şatellites adds an edge to well covered songs like “Zühtü” and the self-written “Disko Arabesque” gives hints as where Şatellites could go in the future, the title giving away how it sounds.

The album is a moreish entrancing journey which winds down nicely near the end with the chilled “Yağmur Yağar Taş Üstüne” one of the highlights.