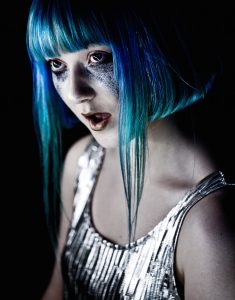 It’s always nice when an artist creates their own world on an album, allowing yourself to immerse in an experience, rather than just simply a set of songs.

German songwriter and producer Novaa does just that on Stolen Peaches which is released today.  Drawn from ideas and fragments of songs that were originally written for an album called Peaches (all stored on a laptop that was stolen, hence the album title) her self-defined ‘organic electronic’ sound certainly stands out from the mainstream and it is equal parts intriguing and perplexing.

The experience you get from this album will depend on your patience and willingness to invest time in her world.  It’s no easy ride with vocal effects and samples flitting in and out chaotically and her voice actually is the music in most places with pitch shift and glitch tactics being used to create an often otherwordly effect.

Opener “Rose” was featured on here back in July and her downtempo cinematics seduced us then and now.  It is followed by single “Hands” which sees phased synth loops flicker and threaten to reach commercial levels but they wither just in time before things get obvious and then album highpoint “Money” is a Grimes-like electro-funk stomper with a hint of an 80s rhythm under the bass boom.

Sadly the sequencing sees the pre-release singles bookend the album which on first listen makes the mid-point seem a bit filler.  There’s occasionally an air of repetition through the experimentation and the glitched vocals might become hard to stomach depending on your mood (“In Line” being the biggest culpirt).  A more accessible sound and structure can be found in fleeting glimpses (the dreamy pounding  in “Sleep” and penultimate song “Sex” could become a filthy dancefloor stomper with the right remix) but Novaa teases with these potential avenues remaining fully in control of her Art.

Eccentric, engaging and frustrating – it’s hard to define the world of Stolen Peaches but if you are wanting something a little different however this may just fit the bill.