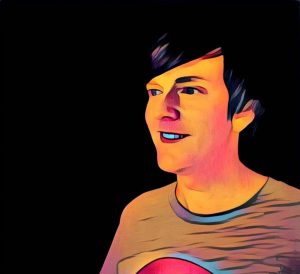 James Dean aka Lost Idol has been making electronic music for a few years now and after a gap of some six years has released his latest album, Chrome Machine Tales.

Following the acclaimed Utters From A Cluttered Mind and Brave The Elements, Chrome Machine Tales is an immersive album of layered electronics, melody and poetic melancholy.

As Dean explains “It seemed somewhat ironic that I was trying to write music that is electronic and futuristic, yet the very synthesizers I was using are now twenty or even thirty years old. It got me thinking about what I was up to at the time these machines were built, leading me to write lyrics about situations and events that have become slowly eroded and embellished within my memory by the passing of time.”

Right from the start with tracks “Machine Romance”, “Mechanically Void” and “Blue Lotus Eyes” it has the sound and feel of Royksopp. Chilled out beats and introspective haunted atmospheres abound. Dean’s heavily processed vocoder voice ensures the tracks never stray too far from the atmosphere of artificial construction yet still retain a tangible and warm energy.

“Following A Shadow” could be a re-worked pop song from the 1970’s with a traditional song construction, layered vocals and sweetly spinning arpeggios. Swathes of rich analogue synths and floaty beats ensure the album is a stream of constantly shifting colours and textures.

Focus on the words and you’ll hear stories from years gone by; the enigmatic girl with blue lotus eyes, unexplained lights in the sky above the Surrey hills, the calculated analysis of the disintegration of relationships – mathematically void, mechanically unstable. These are tales from Dean’s youth retold over twenty years via the technology he has amassed over that time. Musically his self-confessed love for electronic music throughout the ages is evident, but there’s also something very English about his musings – an almost whimsical eccentricity that could be attributed to his fascination with psychedelic trailblazers such as Syd Barrett and Julian Cope.

Chrome Machine Tales is a rich and rewarding album that evolves over numerous listens, it changes like the seasons and unfolds to show true depth.

Chrome Machine Tails is out now.

Written By
Mike Stanton
More from Mike Stanton
We are particularly excited to welcome Neil Grant aka Lo Five into...
Read More