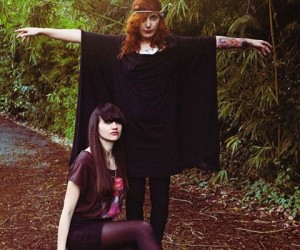 Lisa Masia and Marina Cristofalo moved from Sardinia to London in the early 2000’s to pursue their musical career. Some time later Lilies on Mars emerged, the result of many long nights spent listening to music and jamming with every imaginable instrument at their home studio in Hackney – from guitars to vintage organs, synthesizers, effects and drum machines. Their sound has evolved organically like a rare lily growing on the surface of the red planet defying the restrictive atmosphere, blooming into something rare and vivid. Born of an instinctive understanding of the delicate and surreal imagery they create in which to suspend their compositions, Lilies on Mars have become that ethereal tone that rides solar flares.

ΔGO encapsulates this ethos trapping the serene imagery like lightning in a bottle. It is a mini-storm of an album, each track a weather pattern for us to fly through. There is a dream-like quality to this album; everything is warm and fuzzy, like emerging from a deep and sensuous methadone dream. ΔGO follows on from their 2008 self-titled debut album and 2014’s Dot to Dot.

“Stealing” has an early 80’s synthpop/new wave flavour to it. Lush warm synths that pulse and flow over electronic drums. Lisa and Marina’s vocals are rounded and washed, floating in their trademark dreamlike haze.

“Dancing Star” is instantly catchy, all space-age disco and trippy, sounding almost like it’s come from a futurist disco in a Buck Rogers in the 25th Century episode.

“It Was Only Smoke” takes us even further into dream territory, pulsing synths echoing the sonorous heartbeat of the phased percussion. The mix is so low it’s practically subterranean. “From The Earth Above” moves the sound and feel to above ground injecting more urgency and brightening the mood.

Throughout this journey we glide from track to track. There’s a wistful playfulness as sounds and ideas are expanded and contracted to create a pulsing and organic experience. ΔGO concentrates on the instrumentals with the voices adding to the whole, creating the texture and atmosphere for the instruments to coil and spin around.

“Midnight Fall” bubbles and froths with reverb-soaked beats and light trilling synths interspersed with medieval-like vocals shaping in and around the dense and layered instrumentation. “Rachel Walks by the Sea” continues this otherworldly journey. It’s playful krautrock and psychedelia evoking the likes of Stereolab and Broadcast. The sounds are undeniably analogue with traces of cosmic pop throughout. Closing out with the minimal and abstract “I’ve Got You” in which traces of Daphne Oram and Delia Derbyshire are evident in the sonic rain of pulses and twinkling electronics.

ΔGO is a brooding, atmospheric and sensual album designed to haunt our nocturnal thoughts.

Lilies on Mars on the web: