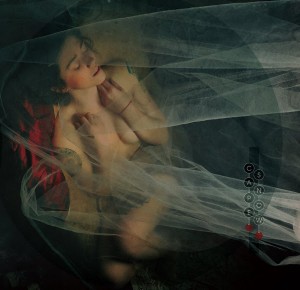 Cape Snow‘s eponymous debut album has been a labour of love made over a two year period. It’s a cross-continental collaboration between Los Angeles based singer Bree Scanlon, with husband drummer Sean, and members of New England collective Tiger Snow. Bree records her melodies and ideas on her iPhone and sends them to the rest of the band to realise the vision and write the lyrics. This collaborative five piece have also invited guests from such bands as Small Sur, Brown Bird and Songs: Ohia to add their creative instrumentation into the mix.

So what does this collaborative, long distance artistic project sound like? The first thing to strike you is the beautiful voice of Bree Scanlon. A mixture of Mimi Parker from Low intertwined with the warmth of Karen Carpenter. There is an indefinable quality [but I will try anyway] to her vocal, an all enveloping, security blanket kind of feel. A nuance that can reassure you that everything will be ok despite all the evidence displayed before your eyes.

Musically this album displays a very subtle blend of slow paced musicianship. There is no showboating here, each instrument is used to create and add to the feel of the overall aesthetic. It is the commensurate of a river meandering through a country’s heartland, slowly flowing, taking a breather in between its rushed beginnings and the oncoming threat of the big blue ocean.

The opening track “All Is Gold” is a real gem. Quite frankly if you listen to this and don’t like it, then this album really isn’t for you and I want a written dossier from you explaining yourself. A lovely mix of drums, piano, bass, and violins with a staccato keyboard to help it along. [The keyboard sound not dissimilar to those favoured by Rob Collins when in The Charlatans or Clint Boon from Inspiral Carpets]. Then there is that voice, dripping like your favourite chocolate product onto your favourite chocolate related snack. The combination here is quite magical. A song about a perfect moment with a loved one.

“I’ve waited so long for a day like this,
Made of understanding, lightning and a kiss.”

Who wouldn’t want to remember that in song?

There is a lot here to like lyrically as well. What with the title of the song and the chocolate nature of the vocals, don’t be surprised if Terry’s All Gold try and use this track to make a comeback in an advert over Valentine’s Day.

Other musical highlights include the atmospheric slide guitar in “Flesh And Blood”, that wonderful keyboard sound holding together “Amazing” and the country tinged, campfire feel of “Never Let Go”, which includes some lovely distorted guitar.

The album consists of ten songs, two of which clock in at under 2 minutes, giving the album a sprightly 35 minute running time. Quite surprisingly quick given the pace of the songs involved. It certainly doesn’t seem that brief on listening. Considering the length of time it took to put this together and the logistical problems involved, it would have been very easy to try and include all sorts of ideas and instrumentation on the final cut. Much credit needs to be given therefore in the editing of this album. Nothing feels out of place, forced or doesn’t add to the atmosphere of the song in question.

This album won’t be for everyone. It is certainly a ‘mood’ album and by that I mean you have to be in the right mood to appreciate it. If you are feeling inclined for something a little more upbeat then this can appear to be a bit one paced at times. However please have a listen if you are in a more ‘Sunday’ frame of mind as there is a lot to appreciate and revel in here. The subtle layers open up more and more upon each listen and will reward your patience. Warning: once hooked though it will be impossible to shift.

A second album is apparently already underway and I for one will be waiting with baited breath. There is an alchemy at work here which is quite precious.

Cape Snow is out now on Burst & Bloom records