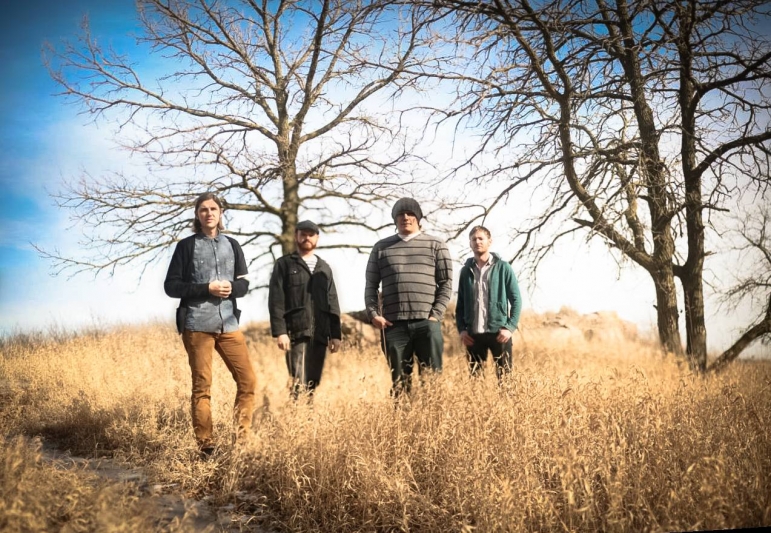 Alternative rock is known for earthy, yet stirring melodies mixed with truthful and grounded lyrics that seek to communicate the daily agonies of everyday life.  While a lot of groups nowadays choose to take the synth-laden route in this form of musical expression, there are others who remain with their guitars as medieval troubadours do their lyres.  Sioux Falls’ own Amos Slade demonstrates this musicality in their new album Hungry Earth.  The Midwestern band consists of singer-songwriter-guitarist Nick Engbers, guitarist Dan Ludeman, bassist Landon Heil and drummer Phildo Mueller.  Their sound is about as gritty and dark as their album cover with the steer’s death head against a black background.  Then again, isn’t that what contains the human condition itself? Let’s see a needlessly saccharine Top 40 song capture such relevance to the earthly spirit.

The album opens with “Sahara”, beginning seemingly with empty sound, all the while working up to the staccato rhythm of the guitar and finally to entire melody.  This sort of rustic sound reminds one of empty landscapes with dramatic features that are hardly noticed until they are wandered through. As for the lyrics, they are products of a deep meditation; they contain poetry that is morbid, yet very relatable to anyone seeking to make a new start from a previous life.  “Stones” brings about a similar vibe, but contains a passion much unlike the title of the song. “Down the Map” brings a sense of movement with its up-tempo while “Lunacy” (my personal favorite) takes us to a space of uncertainty in said movement with Engbers’ unique vocal arrangement in the crescendo of the chorus.  In spite of all of the attributes of modern alternative, this album also contains the aforementioned rustic element of the open country, as is demonstrated by “Interstate”, “Millions” and “Haunted”.  The area of Sioux Falls, South Dakota appears like barren wasteland to most of us city-folk, but to the members of Amos Slade, it is where their roots lie, and from there, they had let it bring forth a tree bearing the fruit of their music.  The lonely, dusty roads they outline with the tracks on their album are the roads we all walk.   Their earthy melodies bring about sense of familiarity in a world of divisions and confusion and this work will hopefully bring about a new idea of what alt-rock means in this new era of the synthesizer.