On December 3, Binghamton, New York folk-rock band Driftwood released their third album. Self-titled, this album was mostly recorded in the Enfield Baptist Church outside of Ithica, New York with Grammy-winning engineer Robby Hunter. They recorded a few songs at Kollar’s Yellow Bike Studio in Chenango Bridge and “The Sun’s Going Down” at Nashville’s Farmland Studio while on tour. 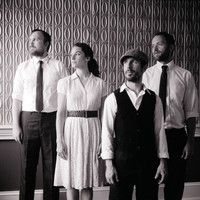 Driftwood is Dan Forsyth on guitar and vocals, Joe Kollar on banjo, piano, organ, drums, and vocals, Joey Arcuri on upright bass, and Claire Byrne on violin and vocals. According to guitarist, singer, and songwriter Dan Forsyth, “We started off playing rock in high school. Then studying jazz and classical music in college. Then we dove headfirst into folk and bluegrass. At some point I guess we kind of met in the middle.”

Formed in 2005, Driftwood spent four years playing coffee houses, bars, churches, rock clubs, bluegrass festivals, and on the streets. In 2009, they released their first album, Rally Day, and played festivals alongside such acts as Bela Fleck, Rusted Root, and Emmylou Harris.  In late 2011, they released their second album, A Rock & Roll Heart, and spent most of 2012 touring, playing 170 shows.

On touring and spending countless hours away from home, violinist and singer Claire Byrne says, “There are few constants when you are on the road, even the music is always evolving. The experience can at times be turbulent, but our dedication to the music, the band and each other is what enables us to continue traveling and playing. It is more fulfilling than I ever imagined anything in life would be.”

Lead vocals trade between Forsyth, Kollar, and Byrne, and help to enhance the group’s dynamic as well as charm audiences with their beautifully crafted songs. Banjo player, singer, and songwriter Joe Kollar says, “We recognized early on that one of our strongest points was songwriting. The greatest songs transcend genre and time and this was one of the motivating ideas behind the band at the start.”

Their latest endeavor, self-titled Driftwood, is their most anticipated album to date. It has cleaner production than Driftwood’s previous releases and boasts their well-known raw acoustic energy. The album opens with mellow “High School Paycheck,” leading into the only track recorded outside of New York, “The Sun’s Going Down,” which features Byrne’s stunning violin work and vocals, and begs you to clap along.

“Roller Coaster” is mostly easy-going, unlike its title’s implication. “The Carburetor and the Steam Engine” starts off slow and builds pace about mid-track, then slows down and speeds up once more. The standout track from Driftwood’s self-titled album is, hands down, “Before I Rust,” which also happens to be the album’s shortest song, clocking in at two minutes and thirty-eight seconds. The song was written by Forsyth, but is sung by Byrne and her solid vocals – “I want it so bad, surely I will, surely I must, somebody get me there before I rust.”

“Words Come True” is one of the album’s prettier tracks, featuring flawless harmonies and a violin solo. “Outer Space” contains hints of classical music, while “Company Store” draws on roots music. “Time Is” features a more traditional bluegrass music sound. “Buffalo Street” has everything you could want from stomping and tambourines to whistling and clapping. The album closes on a much softer note with “Brother,” featuring harmonic vocals “ringin’ in your ears!”

The vocals on Driftwood – no matter from whom – are always astonishing, but from Forsyth’s guitar to Kollar’s banjo to Arcuri’s upright bass to Byrne’s violin, Driftwood is bound to keep you entertained with their energetic and unique folk-rock sound.