Every year a number of venues around the country host a Bigfoot Expo. At these gatherings, people share stories about their encounters with Sasquatch, the legendary man/ape creature. Last summer, the Bigfoot Brigade (BB) hired me to speak to the largest Bigfoot Expo crowd to date at the Bodenhamer Recreation Center in Gulf Shores, Alabama. Wearing military khakis and a deer slayer cap I bought when I spoke at the Save Sherlock Holmes Society Expo in Great Britain, I stood before the bulky crowd and introduced myself. Here is the text of that appearance.
. . . 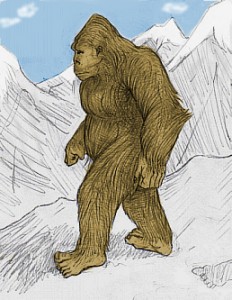 Good evening legend hunters. What an honor it is to be here tonight in the state where Sasquatch has been seen more times than the guy with a banjo on his knee singing to Susanna.
[ L A U G H T E R]
Everywhere I go in America, two things happen to me. First, I notice there are no more public phone booths. Second, I am asked to explain the difference between Sasquatch and Yeti. Well, I respond immediately by saying that Yeti is the creature that does not exist and Sasquatch is the creature that does exist.
[ A P P L A U S E and C H E E R S]
I was talking to Ben Elbow during the cocktail hour—and how about that cocktail hour? Did you see the size of the shrimp tray?
[ A P P L A U S E and C H E E R S]
So Ben Elbow, who had to leave before my talk to attend to some dark blood he was coughing up in between Pall Malls, told me he encountered Sasquatch three times in this state. Ben said he came face to face with Sasquatch in Tuscaloosa County while buying a few cartons of Pall Malls from a guy selling them from the back of his pickup truck on Camp Road near Northport.
[ A P P L A U S E and L A U G H T E R]
Yes, let’s hear it from Northport.
[C H E E R S]
Like many of you who have seen Sasquatch, Ben testifies he has seen not one, not two, not three, not four, not five and nots up to fifteen Sasquatch creatures of different sizes and shapes. So, we know that there are Sasquatch families deep in the woods, breeding and raising their young while craving to get their hands on one pack of Pall Malls.
[ L A U G H T E R]
Who knows how many communities of Sasquatches are living in the deep woods around this country?
[ MANY IN THE CROWD RAISE THEIR HANDS]
I don’t mean for you to guess how many but by the show of hands I know that you feel as I feel, that America is lousy with Sasquatches and more people have personal experiences with Bigfoot than admit it.
[ A P P L A U S E and C H E E R S]
Thank you. [PAUSE] It’s true. People are frightened to report seeing Bigfoot because those who have not seen Bigfoot will laugh and call them crazy. I know because I have called people who claim to have seen Bigfoot crazy people. I have called them liars and drunkards and have scolded them for scaring young children who still believe in the Boogie Man. I did that until I was walking down a country road in this country and a Sasquatch walked out of the brush and onto the road, squatted and took a steamy dump in front of me. Ordinarily, I would think that was disgusting but since it was a Sasquatch I was amazed. Seeing a Sasquatch do anything right in front of me would have been amazing but doing something as naturally as taking a dump was extraordinary. However, when I caught a whiff of what he did on the road, I wished he had done something else.
[ L A U G H T E R]
Then I wondered if inspecting the feces of a Sasquatch would in itself be proof that Sasquatch exists. It may have revealed details of the creature’s anatomy, its bloodline and origin. But, wouldn’t you know it, when the Sasquatch finished emptying itself, he took some leaves and dirt and he cleaned it up. Then he saw me and he ran off until he blended with the trees, the brush, the waves of wild grass and yes, even the stench from his feces was gone.
[ A W W W W S and O H H H H H S]
However, I became a believer and that means there is one more of us out there and it is only a matter of time before everyone meets Bigfoot face to face and says, hey, Bigfoot isn’t so different than any of us and it deserves the right to live in all the forests and woods of our great country, served by our Bill of Rights and our pledges of justice and freedom for all.
Goodnight and drive safely going home, especially if you came here in a vehicle.
[ A P P L A U S E and C H E E R S]

Written By
Frank Cotolo
More from Frank Cotolo
The banana industry is facing a scourge as vicious as a locust...
Read More