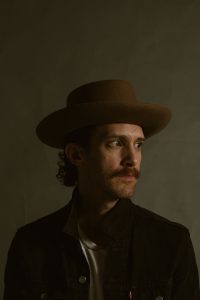 Grizfolk singer Adam Roth continues to trickle out music from his new Deathcruiser project, this time with “Put Your Hands on Me.” The track will be featured on his upcoming debut EP, which balances careful Nashville balladry with Springsteenian fireworks, and features Heartbreakers drummer Steve Ferrone, whose unmistakable playing helps lift the songs into the arena-worthy stratosphere. It’s a collection about death that’s meant to inspire life.

“Put Your Hands on Me” is a page right out of Tom Petty’s playbook, and showcases some beautifully executed pedal steel moments leading to a catchy-as-ever chorus.

“For me this song conjures the emotions of missing and yearning for the physical touch of someone special,” says Roth on the track.

Adam Roth was already hard at work on his debut solo EP when the right band name came to him. He was sitting in the studio, staring at an image of a calavera—a decorative skull often used in the annual Mexican celebration of the dead, Día de los Muertos—and thinking about what music has meant to him during difficult times. “A lot of this music was written during a time when I was grieving,” he says, explaining that his father passed away just before the pandemic began in 2020, and that he was dealing with other personal challenges as well around the same point.

Keep an eye out for Deathcruiser’s debut EP, coming this summer. For now, check out “Put Your Hands On Me” below.