Disclosure: the writer of this review/essay/love letter has previously published author Wendy C. Ortiz in three issues of Specter Magazine (two essays and an interview). Additionally, the writer and Ortiz can be seen exchanging notes and LOLs via Twitter because, in this modern literary era, such is the natural occurrence between like-minded writers and artistic peers.

At a function in Williamsburg back in 2012, I sat in the back of a dark venue—a nightclub-turned-literary salon, I suppose—and listened to author Nick Flynn talk about the craft of memoir. I, at that time, considered myself a memoirist: short memoir writer, flash memoir writer, architect of some future book of memoirs, maybe. As I listened, having no knowledge that I had already entered the first of a twenty-four month bout with writer’s block, I thought about the I. I use I too much, I thought. My I required more distance, more spatial breaths between me, my source material, and I.

And Nick Flynn opened the genre’s chest on stage, showed its heart to me, its beating organ, by revealing the connection between the personal and universal. Spin your story, make the words do the hard work—I’m paraphrasing here, bordering on fabrication, though the thesis remains factually accurate—and somehow find a way to make your story, your personal, fleshy story, universal. Make it connect. Give people bridges. Conduits. Make them see themselves in you. Let them slip on your I.

Excavation, the debut memoir by Wendy C. Ortiz (2014, Future Tense Books), starts outside of the pages, begins to connect, opens its I up to you, by way of title and cover. To excavate is to make (a hole or channel) by digging; to dig out material from (the ground); to extract (material) from the ground by digging. 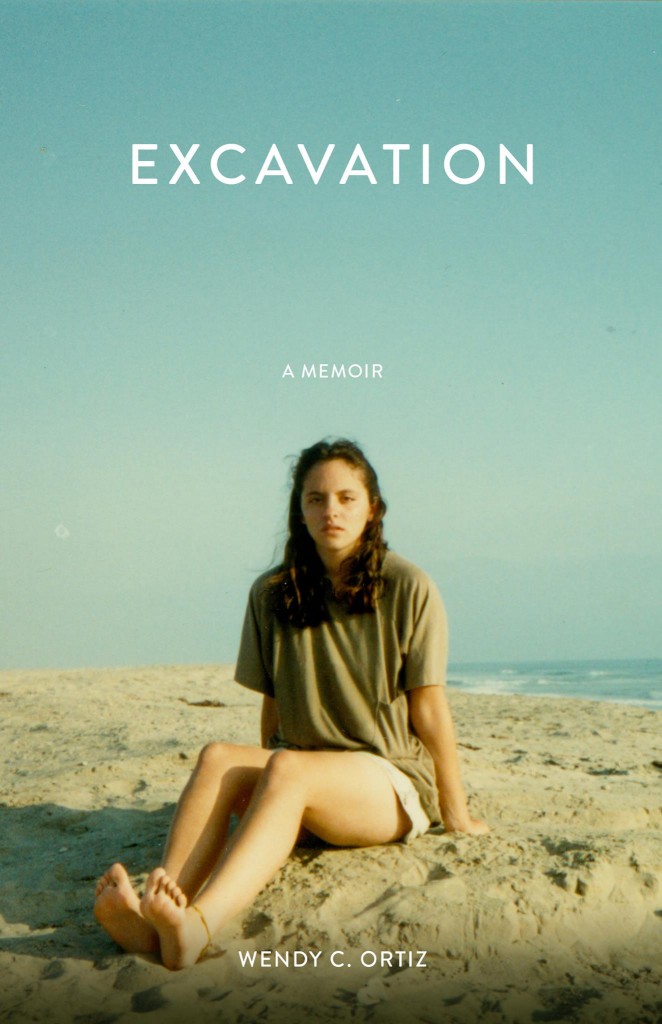 The cover is a photo of the memoir’s protagonist, young Wendy: sitting barefoot on the beach sands of the California coast, the Pacific Ocean in the distance, hair past her shoulders, a piece of jewelry wrapped around her left ankle, and the stare into the camera. Photography is the art of light, of distance, its very existence is as a medium of spatial breaths, of time traveling. I stare at the cover, at young Wendy, thinking about a black boy who begrudgingly walked the sands along the Atlantic Ocean in New Jersey, three thousand miles and years, so many years, away. I connected.

With Excavation, Ortiz shares with the reader the personal, fleshy story of young Wendy’s relationship with Mr. Ivers, her private school teacher fifteen years her senior. Relationship is a burdensome word, weighed down by connotation, but what would be a better word in this context? Friendship? Inaccurate and too benign. Acquaintanceship? Far too formal and sterile to contain the truths of the interaction between young Wendy and Mr. Ivers: intimate, sexual, emotional, manipulative, perilous. To my knowledge, there is no word relative to relationship which aptly describes the connection between victim and perpetrator.

But, in reading Excavation, particularly the deeper the reader digs into the book, one is lost in the unsettling gray. An overcast hovers above the beautiful prose, separating the black and white poles of law, of textbook crime, and this is where Ortiz does her best work. The gray is where Ortiz beguiles the reader by writing with distance, with so much spatial breath, that her I becomes the name of an observant narrator looking down through the parted overcast.

The reader may forget that Ortiz and young Wendy are versions of the same woman, separated by time, bound by memory, and this is a credit to the brilliant, patient construction of the memoir in whole. Memoir is not French for messiness; anyone with a pen and paper, a keyboard and monitor, can spill the beans, slather the blank page with the viscera of those disjointed neural shadows contained within all our brains. The best memoirs, those worthy to be called “memoir,”are the results of real work, of digging, of piecing together, of craft.

Consider: young Wendy sat on her bedroom floor and listened to the live radio broadcast of a David Bowie/Siouxsie and the Banshees concert at Anaheim Stadium, a show that Mr. Ivers and his adult girlfriend attended. The situation depressed young Wendy, filled her with jealousy, with resignation, with a type of soul-wrenching defeat that, in other contexts, could simply be regarded, or dismissed, as the emotions of a jilted lover. Here, Ortiz widens the distance, and wraps herself in the observant I from above:

The three of us, and all of Anaheim Stadium, and every person in Southern California who touched their radio dial and listened to this wailing, melancholy, beautiful voice—I thought everyone was witness to my error, my belief that I was worthy of this person’s love. Worthy of anyone’s love.

And then consider, one page later, “Notes on an Excavation: Why I Didn’t Tell,”which is one of a handful of “notes,”asides, interludes or intermission periods where Ortiz erases the gap between herself and young Wendy, removes the shroud of I and writes to us, reflecting:

Roberto Bolaño, the late Chilean novelist who posthumously achieved literary stardom when the American publishing intelligentsia “discovered”him, is my literary love, second only to the greatest American writer of the twentieth century, James Baldwin. And like all true loves, we sometimes disagree wholeheartedly, as the case in a section of Bolaño’s fantastic essay collection, Between Parentheses:

Of all books, memoirs are the most deceitful because of the pretense in which they engage often goes undetected and their authors are usually only looking to justify themselves. Self-congratulation and memoirs tend to go together. Lies and memoirs get along swimmingly. No memoirist (though exceptions do exist) has ever been known to speak ill of himself or poke fun at himself or coldly recount an embarrassing episode from his life, as if nothing embarrassing had ever happened to him.

Exceptions do exist, and I tend to forgive Bolaño, as lovers are wont to do, for the dismissive, uncompromising declarations which punctuate his entire essayistic oeuvre. Bolaño, for all his brilliance (a fact I can attest to as I’m halfway through his magnum opus, 2666), was often short-sighted, myopic, and avoided the grays as though allergic. Excavation is, if we consider Bolaño to be accurate, an exception. Between young Wendy considering her worthiness of love and Ortiz’s raw, exposed, explanation of why she didn’t tell, of why she told despite not wanting the affair to end, there is no room here for embarrassment. But there is a cold recounting.

In physics, cold is simply the result of molecules slowing rotation, of increased subatomic distance between objects, creating an energy that gives rise to pimples on our skins in January; the cold makes us shiver; the cold evokes danger. To be cold is to be distant, which is not the same as detached because, again, young Wendy and Ortiz are bound by memory, twin avatars of the same author, the same woman who, cold, distant recounting aside, is still human, fleshy, in constant negotiation and reconciliation with the experiences espoused in Excavation, still collecting the bones of an adolescence flensed of the youthful innocence we all wish for, and concoct and consume via movies and novels and television series, but we far too often, upon recollection and with distance, so rarely achieve.

To that point, the final images of Excavation contain Ortiz and her-then newborn daughter, swaddled and protected inside of a stroller, as they walk around the famed La Brea Tar Pits. The last pages eliminate the gap between her and young Wendy, who is gone now, who returns to the neural shadows inside of Ortiz’s brain; what is left is the chilling messiness of real life, of motherhood and womanhood, of those universal aspects which bind us all:

Now, with a daughter of my own, I like to imagine I’ll be able to counter every untruth she might try to pull on me when she’s a teenager, that I will be three steps ahead of her, consulting my own catalog of experiences to be able to cut her off at the dangerous pass she wants to take. My worries are magnified by my own experience of women who claim to love you and want to protect you and yet can’t seem to, don’t know how to. I like to believe I know something, will rise to whatever circumstances is given me.

But of course I want nothing like what happened in my life to happen in hers. To even come close to happening. I want a magical existence for her, one without pain, illness, sadness. I know this is impossible but I still want it. There are always those impossible things we still want, aren’t there?

Written By
admin
More from admin
Hi. My name is Andrew and I am an artist.  I’m not...
Read More