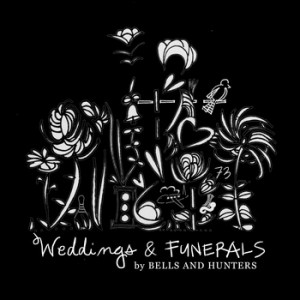 Quick!  When I say “Washington DC” what are the first words that pop into your head?  Politicians? The nation’s capitol?  Monuments?  Bluesy rock? I have to admit, that last one had me doing a double-take as well, but Bells and Hunters was definitely worth the second look!

Bells and Hunters began a few years ago when friends Kelly Ann Beavers and Keith Fischer decided to get together and sing a bit.  Eventually, they began writing and decided maybe they should actually create a band so in 2008 Bells and Hunters was officially born.  Joined by Igor Ivanov on guitar, Terry Willis on drums, and Eric Putnam on bass, Bells and Hunters released their second album, Weddings and Funerals, in March.

As you listen to the album, the rock/blues influences are obvious, but don’t be fooled.  Bells and Hunters has a lot more going on and surprises abound throughout the album.  Beginning with the title track, Weddings and Funerals showcases some seriously creative songwriting.  I love songs that can switch it up mid-stream and surprise me.  Check out the beat changes and bridges on “Weddings and Funerals” and you’ll see just what I mean.

“73”, the second track on the album shows off their rock and roll side.  This song is edgy and tender, hard and soft which pretty much describes this album as a whole.  Bells and Hunters has managed to create an album that walks a perfect line of glorious angst…that feeling of emotion, tension, and perhaps resignation as you realize that perhaps things aren’t what you thought they were and it’s time to move on.

This is made even more clear in “Planes,” “Maybe a Fool,” and “Grey Before Dawn,” the three closing tracks.  If you’re in need of a break up anthem, take your pick. However, if you’re thinking these songs will be morose and sappy “poor me” songs, you will be mistaken.  Rather, they approach the heavy subject with guts, gumption, and guitar riffs. Is there any better way? I don’t think so.

Are you ready for that DC double-take?  Be sure to check out Weddings and Funerals by Bells and Hunters and watch Fourculture for more on this DC surprise!