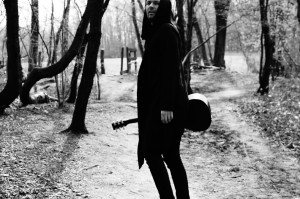 For those who know of Grégoire Fray’s band Thot, you know that he is a natural born storyteller. Through the words and sounds of this new acoustic rock haunting adventure he has embarked on, called The Hills Mover, a new story begins. The new EP, Dead Notes is out today and Grégoire takes us through the hills and valleys of a dystopian society that brings chills down your spine.

The EP opens up with the lead single “Relieved” where the mix of heavy acoustic guitar and pulsating synth intro leads to a sense of fear and darkness of possibly entering a journey alone. “The road is distant, not sure I’ll go on my own.” You’re seeing the images of each lyric smack you in the face with sharp detail as the EP transitions into “Windwalkers”

When I hear the term “Windwalkers” I am quickly entering a visual of native tribes, ones who are open to listening to nature. The song enters in with a mellow repetitive guitar chord and hand beaten percussion, a very ethereal melody. Throughout the lyrics there is this image of Grégoire asking for guidance from the world around him. “When are we going to find the peace we all deserve?” questioning how to release the pain of the past. The song is very peaceful in its tone but overall carries this dark visual of a man who is beaten, yet ready to overcome.

My personal favorite of the pack is “Speechless” though just an instrumental track it gives the listener a sense of travel. The simple acoustic melody is reminiscent of a time lapsed montage in film. It’s difficult to pull off a real good segue but with “Speechless” you get a clear feel of a winter storm, a heavy stomping while the wind blows and the rain moves in, immersing you further into the story of the Dead Notes.

Each time I’ve had the chance to cover anything that Grégoire Fray has done in the past, whether it be by Thot or by his new project The Hills Mover, I’ve been brought to continually use the term “cinematic”. Each song tends to have strategically placed sound effects and tones that drive you beyond the listening stage and into full immersion. With every word each scene of the story plays out in your head. If you like becoming one with the music, The Hills Mover is for you.

The Hills Mover on The Web: