Created by Jack Canfora and Andrew Rein,  The Small Time is a new web series about Ben Bernstein, a frustrated literary agent whose current claim to fame is representing his parents.  The pilot provides a snapshot of Ben’s life — his comical interactions with his squabbling parents and a potential client who doesn’t seem to have a firm grip on reality.  It’s an oddly satisfying combination of dry humor and discomfort.

Grab some Shi Quan Da Bu Wan and watch the pilot below. Then check out what Jack and Andrew had to say about creating The Small Time. 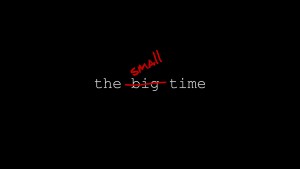 What was the inspiration behind The Small Time?

Jack: Andrew and I wanted to do a project together on the web. Andrew came up with the idea of a literary agent, and we both thought there were a lot of comic possibilities with that, a lot of different ways we could go.

Andrew: We were inspired very much by what we saw happening in the web series space. Folks were creating projects and getting a lot of professional attention for them. We thought it was something we could do well, and we wanted to give it a shot. A lot of the narrative ideas for the characters and story came out of trying to be smart about what would work dramatically/comedically but also be extremely cost-effective to shoot.

The pilot has over 9,500 views on Vimeo and you’re getting attention from web fests and film festivals across the country. Did you anticipate so much attention from just one episode?

Jack: Well, we had certainly hoped for attention for it. We’re very happy with the attention we’ve gotten. Our hope is to try and transfer some of the attention into a means of shooting the rest of the season.

Andrew: We’re extremely happy with the attention it’s gotten, both in terms of professional things like film and web fests, but also just the extremely positive reactions we’ve gotten from friends, family, and strangers; everyone really seems to enjoy the pilot.

How is The Small Time different from your other endeavors?

Jack: Well, most of my endeavors have been theatrical; I’m primarily a playwright. The other nice thing is that it’s purely comedy. I tend to work in drama, and it’s fun to write something just for laughs.

Andrew: For me, the big difference has been working not only as an actor, but also as a creator and producer and co-writer on the project. It’s been challenging — but fun! — to wear so many hats on this. I mean that literally. I’m wearing a lot of caps and fedoras and such.

Jill Eikenberry and Michael Tucker do a fantastic job playing Ben’s parents. How did you get them involved in the project?

Jack: Well, Jill had done a play of mine with Andrew, Off-Broadway (ed note: the play was called JERICHO; you can buy a copy here). We wanted from the early stages to get them involved if possible because they are not only great actors, but lovely people. So, when we felt confident enough in the script, we sent it along to them with a very nice note saying “pretty please.” And, fortunately, they responded very well to it.

Andrew: Well, we wrote the parts for them and, as Jack says, were just sort of hoping they would agree. We got doubly lucky, because not only were they excited and eager to be in the project, but very graciously allowed us to shoot their stuff at their actual house in Connecticut. The best piece of advice I could give anyone creating a web series would be “Put Jill Eikenberry and Michael Tucker in your web series.”

Ben Bernstein seemed like the voice of reason throughout the pilot, but there were times I felt he needed a hug. Are there any challenges to playing him?

Andrew: We wrote him to be the calm center/straight man in the middle of a lot of lunacy. Certainly part of our inspiration was the dynamic in Arrested Development with Jason Bateman’s character. We’re both fans of that show, and we felt like it was a good fit for me to play that role. The biggest challenge, at least in the pilot, was trying to keep my composure when working with Kevin Isola who plays Phillip. That dude is hilarious.

I adored Kevin Isola as Philip and I’m looking forward to the many out-to-lunch characters that will flow through Ben’s office in the series. Is there anyone, in particular, you’d like to bring in to play one of these characters?

Jack: We’re open to stars of any stripe who would like to come in and help us out, but one of the things Andrew and I did from the very beginning was to try and write parts for actors we both knew and liked. We wanted to play to their strengths because we felt it would help us. So, in a sense, we are getting to work with who we want to.

Andrew: Writing for friends made the writing easier because we were so clearly able to picture what the performances would be like and, as Jack said, we were able to write to all these actors’ strengths. It’s really like a custom-made piece of clothing when you write for someone so specifically.

As independent artists, how many hats do you each wear when producing The Small Time?

Jack: Well, we had to worry about a lot of things, but a lot of the stuff was taken off our plate for us because we worked with a really great production company called Nutmeg, so from the beginning we did not have to worry about many of the technical issues that otherwise would have consumed us. Nevertheless, there was a lot to worry about, from the script to the performances to making sure everyone had food they could eat. And now we’re wearing another hat, namely trying to sell the series as much as possible.

Andrew: It was a lot to do. When you’re working with a small budget, as we were, you take on a lot yourself if for no other reason than to save money. I got a crash course in buying production insurance, filling out paperwork with SAG-AFTRA, and so on. For me, part of the challenge was with all that other business and production work happening, I still needed to learn lines and act.

Do you think a finely detailed 1,130 page single spaced novel about a group of girls at a private high school would ever come to life?

Jack: I certainly want to live in a world where that is possible.

Andrew: I always assumed such a book already existed.

With seven episodes written, you’re probably anxious to get taping again. Would you consider a Kickstarter campaign to complete the series?

Jack: Yes we would, but we’re holding that out as a last resort. We’re hoping to get funding other ways so our friends and family can just enjoy the project without having to kick in financially. Having said that, we’re not beneath anything.

Andrew: Given the realities of our production costs, we don’t think crowdfunding is the best path for us right now. More likely we could add it in as part of the complete funding picture down the road, but, like Jack said, we’re trying to find a single source for all our budget needs.