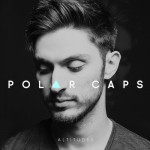 And you wonder why the polar caps are melting? The world wants you to think it is global warming. Yeah, that’s partially the case. Sadly, the scientists have yet to discover the heat bring brought to our musical world by London’s own alternative electro-acoustic pop extraordinaire Polar Caps (aka singer-songwriter/producer Owen Hughes-Holland).

Earlier this year I had the chance to talk with Polar Caps about how the production of the follow up to his debut ep Solutions was going. If you’re not familiar with his music now is the time where I’ll ask you to stop and read our chat from issue 10. Little did we know then that this winter he’d be heating us up again with his second EP entitled Altitudes.

The EP opens up with a track entitled “The Fall of a Man Who Loved.” The title led me to believe that this was going to be a melancholy down trotted song about a bad break up. As they say, you should never judge a book by its cover. This is about a man who falls in love and falls hard. This man is one that cannot stop talking about how great his lover makes him feel. The electro pop rock has this faint key melody with a heavy dance beat that just makes me want to shake what my momma gave me. I would say with my significant other but I am happily single. I hope those out there in a loving relationship have a lover like this!

The biggest stand out track for me is one called “Northern Lights.” The EDM influence in the song is so unique compared to any other Polar Caps track that came before it. The song has a very common theme of being captivated by a very good looking person. Just like the Northern Lights there is something magical about the person who caught his gaze. The lyrical analogies are something out of a romantic tale. If Polar Caps is dating anyone, it seems that he might be a bit of a romantic type if the lyrics hold true. Going back to the EDM theme, when you think of the actual Northern Lights it feels like an electrical magic produced by the universe. The EDM sound brings what I would call an audio analogy to the song. Like if the Northern Lights played their own music, the electric and the synth in the background is what I envision it playing.

From its hardcore love themes to the darker “October” there is a sound to this EP that fits perfectly into any pop lover’s repertoire. Overall, Altitudes is a hot EP that will melt your music loving soul just like a bowl of ice cream in the dead of summer.

Written By
Serena Butler
More from Serena Butler
When Tuesdays usually come around, many of us get excited. We here...
Read More