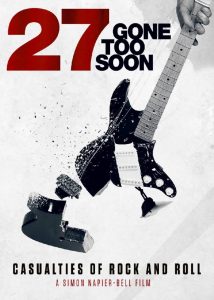 The 27 Club is a strange phenomenon.  Born out from the deaths of Janis Joplin, Jimi Hendrix, Jim Morrison and Brian Jones between 1967 and 1971, the number signifies the age of each artist at the time of death.  The term resurfaced more recently with the deaths of Kurt Cobain and Amy Winehouse.

Rare footage of each of these artists has been pieced together in a new film, 27 Gone too Soon, directed by Simon Napier-Bell, and shows the lives, music and influences of these icons forever frozen in time at the age of 27.  It is interspersed with interviews from other atists such as Olly Alexander (Years & Years) and Gary Numan.  The latter has previously shared his demons on film with the excellent Android in La La Land demonstrating the pressures of the industry coupled with mental health and insecurity.  ‘I have seen more than enough destruction in people I’ve known over the years,’ he told The Independent. ‘This is a fascinating look into what can lead people onto such a terrible path.’

The film highlights the rise in drug use and mental health issues along with the pitfalls of the music industry.  The original era of the 27 Club, in all its LSD-tinted colours, brought about many other artists and works that are well known to be influenced by these problems (Barrett, Bowie, Townshend, Ray Davies…need I go on?) but the film shows how there is still the need for discussion on a problem that lies under the surface, even in a social media age when we are supposedly more aware.

‘27 Gone Too Soon’ will be screened at Regent Street Cinema on Monday 26th March and releasing same day on DVD and Digital HD.

Exclusively written and published for FourCulture.com

Written By
Paul Davies
More from Paul Davies
How about some pounding European electro-pop with a funky twist for the weekend?...
Read More