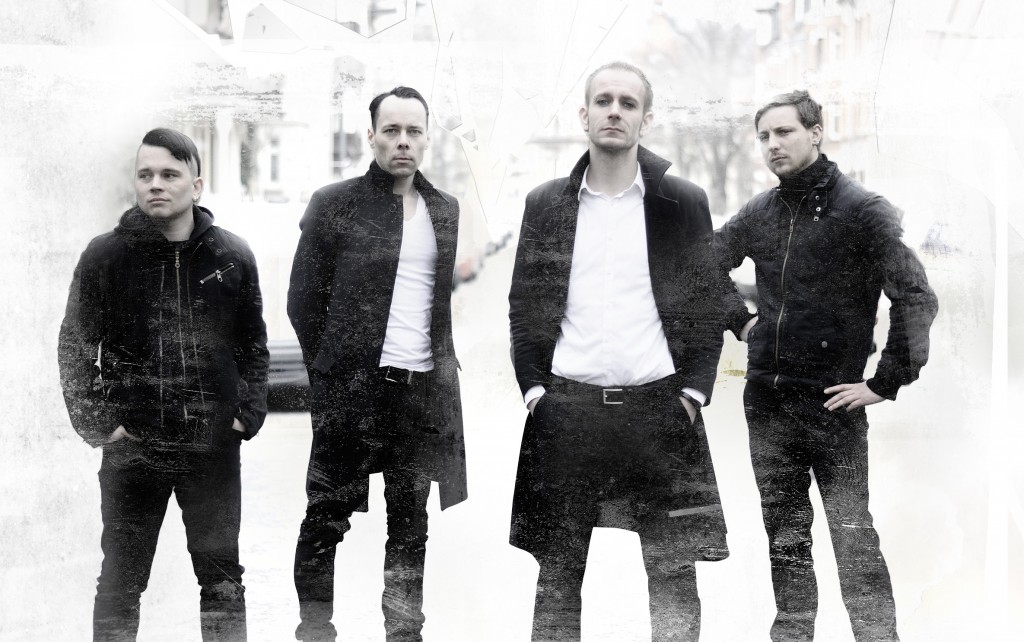 “A man, shaken by his demons, decides to use the only channel to fight them: his music.”  These are the words that describe Joki Schaller, the man behind Imaginary War.  For those who fondly look back on the days of analog synth, you won’t be disappointed.  Imaginary War manage to take those sounds and bring them to the modern era, grounding them with solid drums (by Axel Kunz), guitar lines (by Roman Geiselhart) , and musical machinery (by Martin Pierzchala).   It’s 1980’s meets 2020 as we bring you the sounds of Imaginary War.  Their album Replacing the Ghosts is available now.  We asked them all about it.  Watch for more in an upcoming issue of Fourculture Magazine.

You released your LP, Replacing the Ghosts, last year. How would you describe the album to someone who has never heard you before?

Take a big range of synthesizer textures, add some vintage guitar lines and imagine a rock band striving for the big pop melodies. Add some melancholic tunes and lyrics you have probably the core of what we sound like at the moment. All four of us have different musical backgrounds. We are fascinated bythe synthetic and stoic vibe of electronic sounds and want to put that in the context of “handmade” music.

“The Tide has Turned” was your debut single off of the album. Was this a difficult decision to make as to which song would be first? What made you decide on this one?

The decision was not too hard if you consider that we wanted to choose a song as the first single, which serves some criteria. It represents many of our trademarks, is somehow catchy and also is a decent single in terms of radio and stuff. We would lie if we would deny that. It was also one of our favorite songs in the writing process, where we immediately were excited about just after the idea came out. Hopefully it has this effect on the listener as well.

While “The Tide Has Turned” has the synth-driven dance rhythm to it, the second single, “Embrace,” is much grander and more atmospheric. How do each of these releases portray you as a band?

Both songs kind of mark the two important poles of our range, not to forget the quiet sounds which are also very much influencing us. Whereas “The Tide Has Turned” is more of a dance floor thing, which we love to do. “Embrace” represents the soundtrack like side of our music being a big wave. While writing, things like wide nature and big feelings of loss and hope are subjects. You can call that cheesy, but we like that and hope it affects to people.

What first drew you to the 80’s analog sound?

Our songwriter Joki grew up with that typical “new wave” sound — The Cure, The Smiths, New Order and also many typical “one hit wonders“. That had more influence on him than I ever thought, as he later turned to metal music but came back to his old love again.We are fascinated by the dynamics and soundscapes synthesizers offer and that of course brings you to the high time of those instruments, the 80s.

What does music give you that nothing else can?

A depth of emotion and expression which is hardly to reach somehow else. Music gives the biggest joy and the deepest sadness sometimes at the same time. It’s our way to express where we would not find words or other senses don’t work anymore. And being on stage sharing this music with others is the best experience we ever had. There is nothing to compare the reaction of a crowd or single person to a song you wrote.