We first shared the melancholic beauty of Novo Amor (Welsh singer-songwriter Ali Lacey) back in the spring with his single “State Lines” and so we were pleased to be able to recently catch up with him in advance of his forthcoming album, Birthplace.

Since then he has released the title track as a single which received more widespread attention due to the promotional video highlighting the important issue of plastics in our oceans.

Like a lot of people in the UK, he was motivated to act following the David Attenborough BBC television programme, Blue Planet II.

‘I remember my Dad phoning me after he watched Blue Planet, urging me to watch it for myself.’ he recalls. ‘ We spoke briefly about how great it would be to get on board in some capacity and raise awareness of the issue… a music video, maybe? I began to warm to the idea but didn’t want to put ideas in any of our directors’ heads. Two weeks later I received the ‘Birthplace’ treatment from Sil and Jorik, who are also the directors of the “Terraform” video.’

The process of making the video saw the directors get involved with a local community project in Bali where local craftsmen and schoolchildren were involved in making a whale out of used plastics.  The process has been documented on an insightful short film.

While the song itself isn’t environmentally themed, the muted strings and delicacy of the song complements the expansive underwater view within the video. It is emotional and thought provoking; the beauty of the ocean tarnished by selfish humanity.  With such interest in the environment I wonder if Novo Amor would consider writing more direct lyrics.

‘No. I don’t write politically-charged music because that’s not my preference in songwriting. I’m so thankful that I have a platform to use to collaborate with film directors on environmental topics, but I don’t feel that I’m in a position to speak out politcally in my music.’ 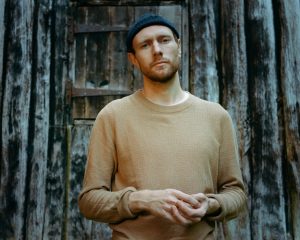 2018 has seen a welcome rise in politically-motivated guitar bands, borne out of Brexit or Trump. Why then aren’t there more artists flying the green flag and raising awareness?

‘Because it’s less spoken-about in the media and in culture more widely,’ he responds.  ‘We see headlines about Trump and Brexit every day. These are the issues, then, that are at the front of our minds, evoking never-ending debate across the country. Music can be a form of rebellion, a way of being anti-establishment. In politics you pick a team and shout your views against and at the opposition. I don’t feel that environmental issues are in the same realm; the effects are slower-burning and easier to ignore.’

Novo Amor has shown great commitment in reducing his carbon footprint on tour and in merchandise production.  He even has a sustainability page on his website.

‘We’re removing as much single-use plastic from our life on the road,’ he says.  ‘It’s a pretty simple change to make and it would be great to see more artists do so. Its no more complicated than carrying a reusable water bottle and avoiding plastic food packaging while putting your backstage rider together.’

He has also teamed up with charities Julie’s Bicycle and Energy Revolution to help him with this.

‘(Julie’s Bicycle) are helping us ‘green’ our rider e.g. removing unnecessary waste from our backstage and touring life. (Energy Revolution) are helping us convert our miles traveled into funding for clean energy projects. We’re essentially giving ourselves a pollution tax, where the tax will help fund solar projects in the UK, re-forestation in India and such.’
Novo Amor’s album, Birthplace is out 19 October just after his tour begins.  You can preorder at https://novoamor.lnk.to/birthplace

Written By
Paul Davies
More from Paul Davies
Bergen based foursome Living have been busy this year with a host...
Read More