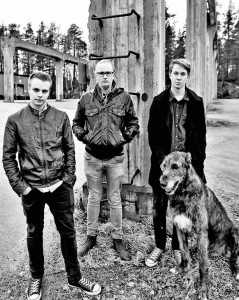 Today Fourculture is excited to preview the official music video for “We Might Fall Asleep,” the latest single from Typeface.  A darkwave rock/pop band out of Jyväskylä, Finland, Typeface is Otto Piirilä on vocals and bass, Ossi Oikari on guitar and backing vocals, and Aku Oikari on drums. The trio formed Typeface in 2009, releasing their debut EP A Thousand Years in April 2013. From that EP, the song “My Life” quickly drew over 20,000 listeners on Spotify and the band began to garner the attention of critics and fans alike.

Now Typeface is working on new music. Since February of this year the band has been recording at Sonic Pump studios in Helsinki, with producer and musician Jaani Peuhu. “We Might Fall Asleep” is the first of the new recordings to be released and it is an outstanding track.

The song begins with a haunting, atmospheric vibe and slow vocals that flow seamlessly into a gorgeous and soaring chorus. The video opens with a couple riding a bike over a bridge, and then moves to focus on the three band members playing their instruments in the calm, knee-deep waters of a bay (or inlet of some sort). With every chorus the video shows short clips of the bike-riding couple lying completely still, staring into each other’s eyes. The visuals are as sharp, clear and focused as the music they accompany and both leave the listener singing along to the chorus … and with feelings. This is a track and video that practically beg to be played on repeat, hooking you in with the kind of chorus that simply must be sung. Typeface may be a newer band, but with “We Might Fall Asleep” they have proven themselves to be a band you should have on your radar; a band that has clearly got ‘it’ going on.