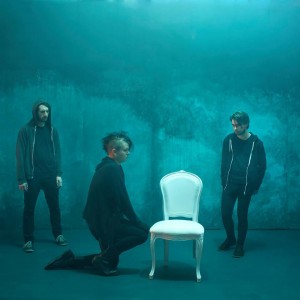 “Pale”, the third single by London trio Little Death Machine, begins softly with a bell-like ambience recalling 100th Window era Massive Attack.  The intrusion of glitchy, delayed percussion that follows however changes the mood completely and the song then kicks in fully with a blast of eerie chiming guitar.

The vocals are also unsettling, seemingly female on first listen, as vocalist Daniel Cross uses techniques that add to the enigma but maintain a natural vocal tone throughout.

The song is all about ‘mood’ and there are elements of dub through its heavy bass and snare sound and the rhythmic groove holds everything together in a trippy, train-like hypnosis.   The song builds to a finale with guitars but keeps a steady momentum without the need for an explosion, the suggestion of drama and urgency is enough here.

Intriguing and compelling, “Pale” is out now.