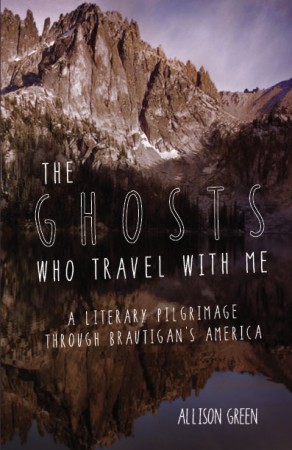 Allison Green’s The Ghosts Who Travel with Me is a subtle work. The book is divided into five sections, each of which are composed of short vignettes that alternate between Green’s present day journey in the footsteps of author Richard Brautigan’s Trout Fishing in America and recollections of her childhood where she first encountered and fell in love with Brautigan’s writing. Between these two poles Green is searching, on the page and in the lakes and rivers of Idaho, for just how she became the person she is.

For Ghosts is a deconstruction of the forces that shape a reader and a writer, and how our first love when it comes to authors is one that lingers no matter how we might mature past them. Green draws repeated parallels between her own development as a reader, consuming all of Brautigan’s stories and making her own first attempts at writing by mimicking his voice, and her strong sense of family history and the various legacies her mother and grandmother left her. “I will always keep this book,” she writes, “in the same way that I will always keep the milk-glass chicken and the silver bracelets of my grandmothers… The book will always reflect back the me that was and the me I am now.” And as we travel with Green from the girl she was to the woman she is we watch her move past wishing to be the writer’s nameless muse to wishing to be the writer, full stop.

This is a book written by and for readers; I have never read Brautigan (though now I plan to), but that didn’t keep me from relating to that deep ache we know from finding a book that speaks to us. Green’s experience of tracing Brautigan’s footsteps echoed my own first time reading Michael Chabon’s Mysteries of Pittsburgh while a freshman at the University of Pittsburgh. Chabon opened the door for me into “literary” fiction, setting off a second stage of my development as a reader, and I know the almost ecstatic feeling of such alignment between a moving work of art and your own immediate experiences. I wasn’t even finished with the novel before I checked out his next book from the library, and I now own the full set of Chabon’s books. I am the key demographic for such a memoir as Green’s.

Ghosts is written with a light touch, the prose crafted in that easy way which belies the amount of work it requires. Green is an experienced writer and teacher, and the maturity of her command of language is clear in the text. Here is someone who isn’t interested in showing off, and instead aspires to the idea that the best craftsman is the one who goes unnoticed. Occasionally her sense of humor peeks through , such as when she compares the concept of “Artist as Lone Genius” to “Poet as Dog Pissing on Trees. (My dog will engage in a pissing competition long after he has any piss to spray.)” Like the rest of her prose, it is wry and self-aware, as quick to be aimed against herself as others.

In fact, Ghosts is so seamlessly put together that it’s hard to point to the concrete moments to explain just why I found it so lovely. It’s an ephemeral effect, the words and pages gently building until you suddenly find yourself transported back to the moment that you, too, fell in love with an author for nothing more than their words on the pages. For those us of who call ourselves readers, who maniacally update Goodreads accounts and fill our twitter timelines with authors, our relationship with books is something that can feel religious; The Ghosts Who Travel with Me is a missive for the true believers. Green’s love-letter to the first author she fell in love with is a memoir that will resonate with any who has finished a book and then sighed that the journey had to end.