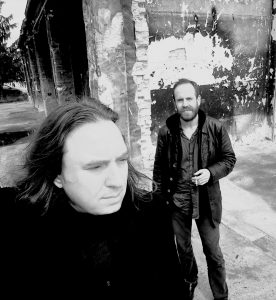 Thorsten Quaeschning and Ulrich Schnauss have teamed up to create a record of pure Berlin-school bliss which pays homage to the past while remaining fresh and relevant. Crisp, interlocking patterns are modulated and mutated with mathematical precision into eight pieces of pristine, post-kosmische sounds to float away to.

Recorded over two intense weeks in Berlin, Quaeschning and Schnauss – both students of the great, late maestro Edgar Froese and current members of Tangerine Dream – locked themselves in a studio full of vintage synthesizers, analogue sequencers and drum machines, and the result is a gorgeous set of purely electronic music. Whereas the title suggests something new and contemporary, the pieces are firmly rooted in the 1970’s evoking the likes of Cluster, Tangerine Dream and Klaus Schulze at their spacey best. 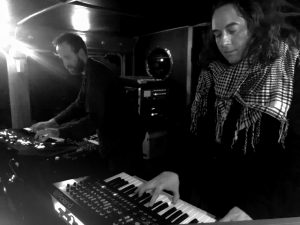 Many of the tracks meld Tangerine Dream‘s sequencer-led journeys and Cluster‘s playful side allowing poly-rhythmic patterns to build – slowly but steadily – bar after bar, until synth-Satori is reached. By the time the last track on this album runs out, it’s obvious these two producers are themselves masters of their craft.

“Main Theme” is dramatic and sweeping with more than a few nods to the retro and synthwave movement. “Rain On Dry Concrete” and “Slow Life” are all bubbling arpeggios and bright shiny synths that play with melody and space. “Cats and Dogs” packs so many ideas in it appears to swell and grow with each listen. “Thirst” is almost a follow-up to Tangerine Dream‘s “Love on a Real Train” crossed with Jean Michel Jarre‘s “Arppegiator” with its crystal-glare electronics, spiraling sequencer and pulsating cues.

“Flare” is a ballad with pure TD touches, while “Prism” gathers all the prettiest moments from TD and Ulrich‘s solo work with breathy synth pads creating a woozy 80’s shoegaze vibe, it swirls slowly leaving a fuzzy sheen in its wake.

Synthwaves spans a range of moods from pulsating electronics through hypnotic drone to bright, chiming tones. Their heady explorations conjure meditative lulls throughout without falling into new age murkiness. It is a beautiful journey into a neon-metropolitan dusk.

Synthwaves is out now on Azure Vista Records on CD and Vinyl LP (Digital download via Pedigree Cuts).