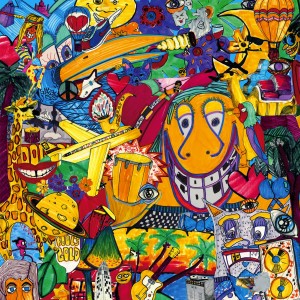 Here’s another new release for Record Store Day. It’s LA-based five piece Fool’s Gold with their third album Flying Lessons and you can pick it up on limited edition orange vinyl.

The album sets the tone from the off with a sunblast of samba percussion and chilled, almost lazy harmonies. It’s a timeless, well-rounded carnival of sound which takes in some of the better aspects of classic albums (the funky guitar of Young Americans…the ethnic haphazardry of Fear of Music) while the twenty-first century among you will hear Vampire Weekend and early Yeasayer.

The party vibe does not let up and this is the perfect music to add to your summer playlist whether for barbecue, beach party, or some late night mischief if you are that way inclined. “Wildflower” and “Don’t Be Like Them” slow the party down for a bit of variety meaning there is spotlight on the vocals of Luke Top which weave between the styles of Mark Hollis and Dent May.

The songs are not reliant on strong choruses but there is an abundance of ‘oh-oh’s, ‘whoa’s and ‘yeah’s to ensure you can sing along at will. Despite this the pick of the bunch is probably the most commercial song, “Another Sun” with its rousing summery guitar adding to the already epic layers.

Fool’s Gold show off their musicianship on the occasional end-of-song jam but it stays on the right side of self-indulgence. There’s the sax-drenched dub in “Break the Cycle” and if you have ever wondered what it would sound like if the Star Wars Cantina band were to gatecrash the set of The Lion King then the answer is found in several passages throughout the album.

Flying Lessons is certainly worth adding to that ever-growing Record Store Day list but if you miss out it is available for general release on other formats on 19 May.

Written By
Paul Davies
More from Paul Davies
If you aren’t aware of Halfnoise then now is the perfect time...
Read More