It is a gloriously hot day….
You decide that there would be nothing better than a dip in the river, to close your eyes and float where the current takes you…
Water softly lapping at your person while the intense sunlight plays psychedelic shadows across the underside of your eyelids…
Ever wondered what that would sound like musically? Then look no further. 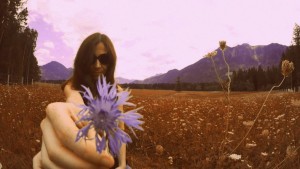 Melt Inside The Sun is the second album by Austrian artist Julia Hummer, who performs under the band name Juleah. The album title is well chosen as each song shimmers and you can practically hear the heat haze on each groove. Her vocal style is strong with a seductive ‘breathy’ quality. Lyrically it may have a brooding, tough introspection but this is someone determined to enjoy the ride of her own emotions.

If Hope Sandoval had had to write an album about her summer holidays it would have come close to this. This is a Mazzy Star sound with a Sundays aesthetic.  If those two comparisons don’t make you at least intrigued, then I am failing to convey how wonderfully hypnotic this album is. If I can go back to the river analogy, [and I will], each song comes at you in gentle waves, with little eddies first taking you in one direction and then gently spinning you around in another. Listen to the single “Beautiful For You” to hear those gentle vocal waves lapping at you in full effect. There is even a track called “On A Float Together” just to hammer the point home. Having listened to the album as a whole you will find it hard to remember an individual track, having been taken on a wonderful journey on your own personal river. Individually, each song stands up on its own personal merits. A tough trick to pull off.

Musically you can hear some wonderful influences creeping up to the surface. The title track has elements of Led Zepplin “When The Levee Breaks”, there’s the Marc Bolan-esque guitars on “Wild Machine” or the chugging rhythm guitar of Tinariwen on “Covers And Shells”. That is just on three of the first four tracks.  Throughout the album
she double tracks her voice in a harmonic way very reminiscent of Ride. I know that these influences will annoy those of you who are looking for something completely new, but please don’t dismiss this album because of it. You would be really missing out. They are there if you want to look for them but they never wear a bright pair of pants while driving a speedboat. Nothing is going to disturb your relaxation on this river.

It is very tempting to moniker this artistic work with an ‘Album of the Summer’ tag. Indeed, with the album cover, a glorious sun flare, the album title containing the word sun, and with all the bird and cricket background noises in “Sommertraum”, you can’t say that it wouldn’t be justified. However, this is a great album no matter what the weather, or the time of year. What it will do is bring some sunshine into your life. It is the album equivalent of having arrived at a festival, put up your tent, claimed your wristband, cracked open your first beer and having nothing else to worry about apart from which bands you want to see in the next three days. In capturing that feeling there can be no higher praise… Bliss! This has gone straight into my top three albums for this year so far and I will be very surprised if it has dropped out by the start of 2016.

“I want to make it beautiful for you” Juleah sings on her current single. Mission accomplished.

Written By
Mark Simpson
More from Mark Simpson
So how is the Christmas shopping going? Still frantically running around every...
Read More