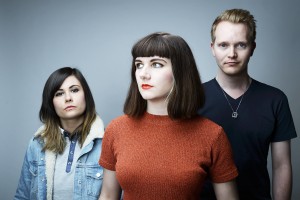 From the south coast of the UK comes this new trio Curxes (pronounced as ‘curses’) who describe themselves as Blitz Pop.  While they rely heavily on synths and a slightly retro sound, the term is not a reference to the ‘Blitz Kids’ scene from the early 80s but more about the effect their music has.  Debut album Verxes is definitely flung upon you with a venom you can’t ignore and is all the more exciting for it.

“Haunted Gold” lets you know what you are in for early on with violent synth stabs and a percussive slap to the face.  Soundwise it’s like early Siouxsie singing over someone like Fad Gadget.  The harsh and unpredictable rhythms don’t rely on obvious preset arpeggios and this is indicative of the album as a whole.  It’s electro pop without rules and a bit like listening to someone like Dirty Projectors or early Sleigh Bells for the first time where there is no obvious comparison.

Replacing a letter in their name with a different one naturally links them with Chvrches (who they have remixed) but this is less straightforward pop with only single “What you want” having familiar or contemporary synth/modulation patterns.  Despite this ‘semi-commercialism’ the screaming, harsh vocal ensures it remains as exciting, unorthodox and moreish as the songs that surround it.

Verxes as an album seems to be split into four parts with various interludes acting as markers.  However, it isn’t a double album as track lengths are short throughout and songs like “Noise pollution” and “XXXX” (the fourth ‘interlude’) seem to end just as they are getting started.  Let’s not complain though and instead revel in new, innovative song structures which follow the lead of art/post-punk band Wire in not following conventional patterns or drawing out songs for the sake of it.  It is boring to expect in music.

Refreshing and full of ideas, Verxes has a surprise at every corner.  It speaks volumes that the slower, almost Kate Bush-like ‘Further Still’ can come immediately before the punkish chaos of “Ghost” and it doesn’t seem odd.  In the third section there is the best example of unity in disharmony with the gothic elements of “Spectre”, followed by echoes of Fever Ray in the building “Run from the Funeral” and then a frenzied, almost electro version of Deerhoof in “Animal”.

You probably won’t know if you like it or not for ages…but you’ll have fun finding out.

Written By
Paul Davies
More from Paul Davies
There’s not a lot you can add to what has already been...
Read More