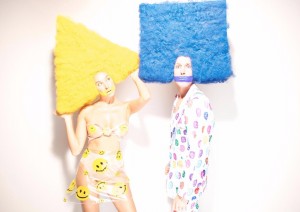 Ediblehead are a force to be reckoned with. They fall under so many categories that they almost dare you to define them. I may go with some combination of psych-rock, robo-glam-disco, glitter-punk with elements of Italo disco and new wave.

They consist of the crazed minds of Robby Rockit and Eva Zeva who imbue the music with so much charged energy that it bounces out of the speakers, takes up residence in your room and proceeds to shake you by the shoulders until you simply have to dance.

I first came across them when I played “Hearts on Fire” on my radio show The Jupiter Room. It was a zinger of a tune. All wailing sirens, rubber-necking bass and whooping synths. It was a party of a record evoking the likes of The B-52’s and My Life With The Thrill Kill Kult. “Hearts on Fire” is the stargate into their glowing neon world of cartoon electro-rock and riot grrrl posturing.

Well, having been given a preview of the new album, the delightfully named Animal Lick Stick, it’s apparent the luminous acorn doesn’t fall far from the tree of their psychedelic excess.

Opener “Candy Raver” sets the benchmark with bouncing techno riffs and bubble-gum rave throw downs. “Hook It Up” hurtles in with shades of Sigue Sigue Sputnik and “Lock ’em Up” could have come from Dress for Excess with rave-tinged synth barkers and cool samples.

“House Is Pumpin’” is pure sleaze-core with tricksy hip-hop beats and Sheep On Drugs takeout riffs. The album is a joyride of lip curls and elaborate set-pieces all underpinned with some spot-on production and insanely catchy melodies.

“Release Me Now” is one of the more conventional tracks on the album and one of the strongest. It’s all sweet melody and catchy chorus. There are some lovely touches throughout and it’s driven by a lush psych-rave keyboard refrain.

This is an album absolutely bursting with ideas, it is a sonic box of delights that doesn’t take itself too seriously. Ediblehead are destined to glide under the mainstream but that’s no bad thing. I can see several of their tracks being used in commercials or on soundtracks.

Animal Lick Stick is a joyous album of childlike naivety as Rockit says “It’s like a beat oriented candy colored rainbow with a message of self-belief. If you let go of fear and doubt, all doors will open up.”

Yeah, that about sums it up for me.

Animal Lick Stick is out Spring 2016. “Hearts on Fire” is available as a free download for a limited time HERE.